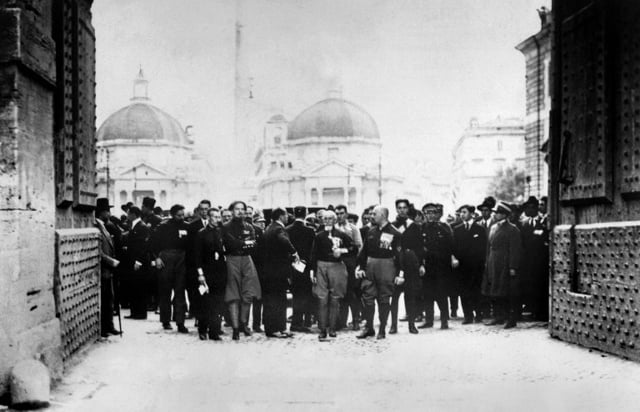 Benito Mussolini and Italian fascists during the March on Rome, by which the party came to power. Photo: Publifoto/AFP

The event would leave students with a “unique memory” of a “special event”, the Istituto Via P. A. Micheli school promised in flyers advertising the ball on Monday.

“It was a terrible idea,” said Fabrizio de Sanctis, the president of Rome's branch of Anpi, the national partisans' association, which commemorates those who fought against fascism.

“You absolutely shouldn't try to create a party atmosphere with a fascist theme – especially in a school,” he told The Local on Tuesday.

De Sanctis added that these kinds of festivities were “a misrepresentation of how it was; it ignores the horrific things which went on and could certainly minimize the reality of fascism.” Flyers for the 'Grand Fascist-Era Ball' had promised music from the period of Benito Mussolini's rule, as well as decorations and photos from the time. There was also a dress code, with attendees asked to ensure their outfits were “as faithful as possible to the period”, with “at least a themed accessory”.

However, the school cancelled the ball less than 24 hours after its announcement on Monday, with headteacher Anna Maria Altieri informing parents in a second note that the event had been called off “in order to avoid misunderstandings”.

When contacted by The Local, a school secretary said that no one was available to explain exactly why the event had been cancelled, or whether the ball will go ahead with a different theme.

The goal of the original event, Altieri explained, was “to promote an initiative of cultural value, as part of a project of historical research approved by the Ministry of Education”.

“Our goal was not to re-evaluate a period which has already been clearly and unquestionably condemned by history and by the Italian population,” the school's headteacher said.

The school's 'Reconstructing History' project was planned in collaboration with the ministry and the initial flyer for the ball included its logo. But a Ministry of Education press officer told The Local she did not think the ball itself had not received official approval. Flyers advertising the 'Grand Fascist-Era Ball' had noted that the school itself had links to the fascist era, having been opened by Mussolini and retaining traces of the period not only in its distinctive architecture, but also in its archives, which include flags, old photographs and documents dating back to the period.

One of the photos on the original flyer showed dictator Mussolini in uniform, walking down the steps of the school with its headteacher at the time.

Anpi's Rome president De Sanctis told The Local it was “for the best” that the event had been cancelled.

“Teaching children about fascism should be treated seriously; for example by inviting witnesses in to explain what that time was really like,” he said.

Anpi has an agreement with Italy's Ministry of Education about including the fascist era in the school curriculum, for example holding talks for survivors to share their memories of the period, and holding events on memorial days.

The driving force behind the ball, De Sanctis said, was “ignorance”.

“Not just in Italy but in all of Europe, we need to be very vigilant about how we address this period of history and making sure it is not forgotten or misrepresented,” he warned.

Italy has in the past been accused of never fully condemning the fascist period of its history, with a number of Italians continuing to venerate Mussolini today.

Emilia Romagna in the north of the country last year became the first of Italy's 20 regions to ban the sale of fascist souvenirs. Mussolini's hometown of Predappio in the region has become a focal point for neo-fascists, with 50,000 Mussolini pilgrims visiting each year in order to have their photo taken at the dictator's tomb and leave messages of admiration in the visitor's book near his grave.

And revelations that the Italian government was readying €2 million to keep the fascist period alive by way of a museum in Predappio caused fresh controversy last February.

Some fear that the new museum will amount to nothing more than an expensive endorsement of fascism funded by public money – but organizers said they were keen to avoid this happening.

The museum is being pushed by Mayor Giorgio Frassineti, who told La Stampa that the project was not about celebrating Italy's notorious fascist dictator, but an attempt to “do something important for the history of our country.”