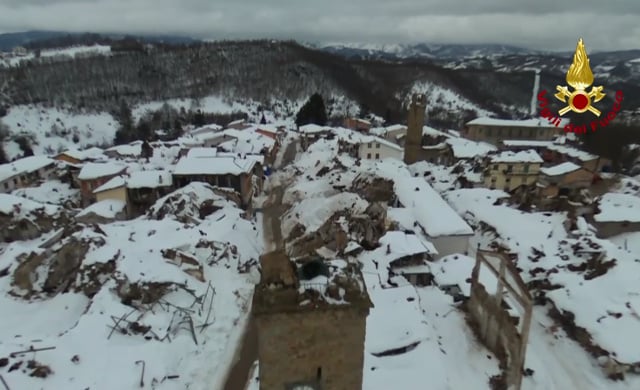 The organization Rome Drone, which also runs events and courses, including one aimed at workers and volunteers in the Civil Protection Department, noted that the Vigili del Fuoco had “used drones during the rescue efforts after the earthquakes in Amatrice and Central Italy, and after the avalanche which hit Hotel Rigopiano.”

Drone investigations of the damaged towns allowed firefighters to assess the extent of the damage and work on plans for recovery. This meant that fewer rescuers had to put themselves at risk by entering the so-called 'red zones' or most fragile areas of the towns after the quakes of August and October last year left many buildings structurally unsafe.

The footage below was taken by a fire service drone over Amatrice, the town hit by a deadly earthquake last August.

When an avalanche destroyed Hotel Rigopiano in Abruzzo, drones were again a crucial part of the salvage efforts.
Extreme bad weather left the area hard to reach on foot and rescuers had to dig through several feet of snow, so using technology helped save time by identifying spots where people might be trapped, by tracking body heat, phone signals and other data.

The award will be presented on Tuesday to Giuseppe Romano, the director of the Firefighters' Emergency and Technical Rescue department. Other organizations and businesses recognized in the awards include the Italian Air Force and start-ups from Milan and Modena.
The footage below shows the devastation to Hotel Rigopiano one week after being hit by an avalanche.
+
The award is just the latest accolade for Italy's firefighters, who have been widely praised for their efforts over a difficult few months and were recently named the world's best fire service at a competition known as the 'firefighting Oscars'.
However, last week saw many of the officers – including some who had worked on the rescues in central Italy – take to the streets to protest their low pay.
“Beloved by the citizens, humiliated by the state,” read one of the placards.