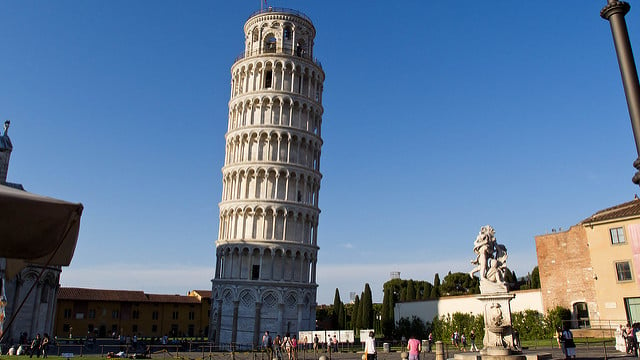 The wheel will be almost as tall as the tower itself and just a five-minute walk from the landmark, the city's cultural commissioner Andrea Ferrante told Italian TV on Sunday.

He hoped this would show people “there's more than just the tower – the whole city is beautiful.”

Authorities plan to install the attraction, which will be built on what is currently a car park, temporarily at first, in order to assess its popularity. After a three-month trial this summer, the wheel might then be relocated on a permanent basis.

Not only would visitors be able to see the tower from a unique angle, they'd also catch a glimpse of the Mediterranean coast from the vantage point.

Italia Nostra, an organization which campaigns for the protection of Italy's cultural heritage, criticized the idea and said the giant wheel wouldn't complement the city's medieval architecture.

The Tuscan president of the organization, Mariarita Signorini, said the project should be treated “with caution” because of Pisa's history and culture.

“London has a very modern spirit, with skyscrapers and huge buildings,” she told Il Corriere della Sera, in reference to the success of London's own giant wheel, the London Eye. “In the city of the tower, a wheel with a 50-metre diameter doesn't make any sense.”

But Pisa's own cultural heritage authority has given the go-ahead to the project.

“We can't keep getting by with the Leaning Tower alone,” heritage councillor Salvatore Sanzo said, according to Ansa. “A giant wheel could make the difference.”

READ ALSO: What is this dolphin doing in the centre of Pisa?