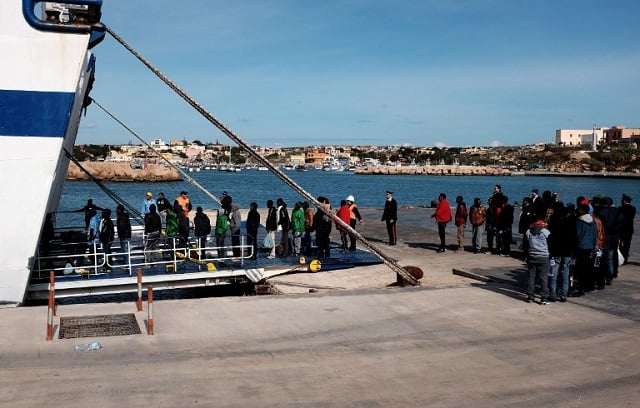 File photo of migrants at the port of Lampedusa: Alberto Pizzoli/AFP

About 122 of the migrants were saved after being spotted by the Golfo Azzuro, run by the Spanish Proactiva Open Arms group.

“We saw the lights, the rescue boat, but we were very far,” Farses, a migrant from Ghana, told AFP aboard the Golfo Azzuro.

He had earlier been playing draughts, also called checkers, with another Ghanaian; both had won a game, so they agreed to play the tiebreaker once they were in Italy.

But the friend fell asleep, and was among seven who fell into the sea when a strong wind buffeted the boat. Only two people were recovered.

“He was swimming very fast. But we couldn't wait for him, because the wind was very strong,” Farses said.

“The one who was driving the boat wouldn't stop, (saying) 'We have to move on, move on'.”

The Spanish boat brought the migrants to the Italian island of Lampedusa, the latest in a wave of some 1,200 migrants that have been rescued on the Mediterranean and brought to Italy in recent days.

On Friday, the Italian coastguard said the number of migrants saved in rescue operations this year had surpassed 15,000.

Aid groups say the exodus is being driven by worsening living conditions for migrants in Libya and by fears the sea route to Europe could soon be closed to traffickers.

The United Nations refugee agency estimates that 440 people have lost their lives trying to make the crossing from Libya to Italy since the start of 2017.