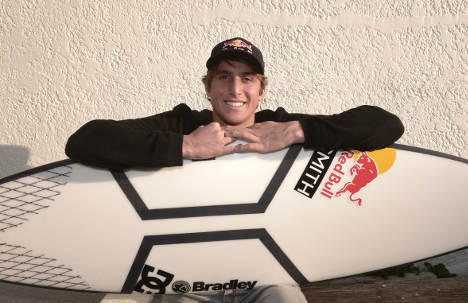 Leonardo Fioravanti is one of the world's most exciting surfing talents. Photo: Iroz Gaikza/AFP

Italy's first and only professional surfer, Fioravanti, a potential world champion if his form and fortune hold, makes his full-time debut next week on the Championship Tour, the elite surfers circuit, on Australia's Gold Coast.

Born in Rome, Fioravanti rode his first waves 20 minutes away from the capital in football-mad Italy with his brother, Matteo, when he was six.

“All of my friends played football, which is really popular in Italy. But Matteo and I wanted to spend the whole day in the water,” he told AFP as he trained in the big surf off the French Atlantic coast here.

“Qualifying for the world championship has always been one of my dreams, and I knew I could do it, but I just didn't think it would happen so soon,” he added.

It all started when he was six and family holidays were spent on a beach run by surfers who put Leo and Matteo on boards. He was so good his family decided to help him develop his talent to the full, to the extent that his mother even snatched him out of school when the surf was up.

“When the waves were good, my mother would come and find me at school and tell them I had an appointment with the doctor,” he said. “During the vacation, we toured France, Spain and Portugal looking for waves.”

The next step came when his mother put him on a correspondence course to free him from the classroom while he travelled to Hawaii, California and Australia in search of better surfing conditions as he chased his dream.

Aged 10 Fioravanti was spotted by Red Bull and Quiksilver, who still sponsor him today.

Stephen Bell, Fioravanti's team manager, said the boy's rise to the Championship Tour ranks shows that “anything's possible for Leo. He has the potential to go far, for sure.

“He got here at the age of 19 and his aim now is to have a long and successful career. But his big dream is to be world champion.”

Fioravanti revels in the surfers' life while keeping his dream alive of eclipsing his childhood idol Kelly Slater who will be competing on the Gold Coast.

“When I first started surfing, I used to watch all his videos. If you were to see my bedroom back home in Italy, there's still posters of Kelly Slater up on the walls that I put up when I was 12 or 13,” said Fioravanti.

At 15 he became European junior champion and gained the self-belief he needed to reach higher.

“If I was beating 20-year-olds when I was 15, then I could go right to the top with sufficient determination,” he said.

Last season he was invited three times to compete on the professional circuit and caused a sensation when he twice beat Slater, the US 11-times world champion.

“His dream now is to be world champion and for him everything is possible. He has the potential,” said Bell.