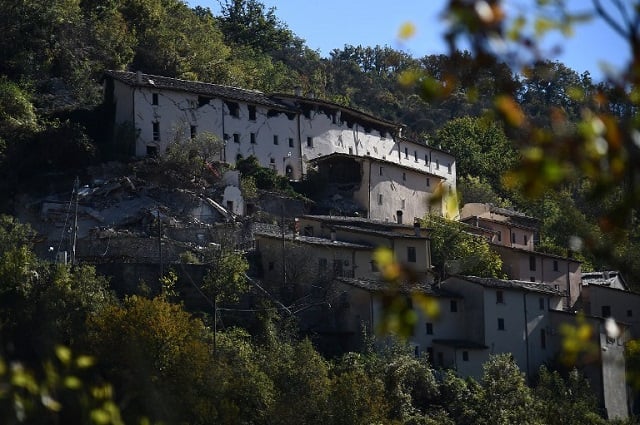 Together with her husband, Topps spent six years renovating a derelict farmhouse into the Hideaway, a set of self-catering holiday apartments in the idyllic rural town of Amandola. Then last year, a series of earthquakes damaged both their home and the apartments. The Hideaway before the earthquakes. Photo: Sarah Topps and Mark Fayers

To keep it from collapse, their house has been tied together with bands, but is unfit for habitation.

“At a time when Le Marche was still reeling from the previous earthquakes and, by now, many more friends had become technically homeless and had their income ripped away for the foreseeable future, this was disastrous,” said Giselle Stafford, a friend of the couple who lives in nearby Umbria.

“The local government is moving slowly and it will be years before anyone will see their homes restored,” she added. “They are also actively stopping people from helping themselves by not relaxing the planning permission laws. At the moment the only structures the earthquake victims can have are ones that have wheels!” Living in Umbria, Stafford felt the bigger earthquakes but her own home suffered no damage, apart from two ornaments which fell off a shelf and shattered.

“We are truly fortunate, and we hope to persuade tourists that nearly all of central Italy is absolutely fine and open for business,” she told The Local.

“But our friends have done so much for others, and continue to do so, we really feel we want to do something worthwhile for them,” Stafford said. “As expats living in Italy, we really feel we should all pull together to help and support each other.”

Sarah and Mark had assisted in earthquake recovery efforts, not only in Amatrice but also in l'Aquila in 2009.

Within a week of the August 24th disaster, they raised over €8,000 to help animals in the dangerous red zone, from domestic pets to the many farm animals in the area, coordinating with animal protection organization Oipa.

“They have been a driving force behind raising money for the earthquake-hit animals around Amatrice – as they did after the devastating earthquakes in L'Aquila several years ago,” explained Stafford. Stafford and her husband Mark began raising money to help their friends buy temporary accommodation while their home is uninhabitable.

“They are always first to help others. They are an active part of their community and daily promote the beautiful area,” she explained. “We can't help everyone, but we can make a difference to one family, who, in turn, will always pay it forward and help others in need.” Giselle and her husband, also called Mark, have set up an online fundraising auction, which can be accessed worldwide and will take place between March 19th and 26th. With goods up for grabs ranging from artisan items, cooking classes, guided tours and holidays, they hope to help their friends while promoting the regions.

“Here in Umbria and Le Marche, we are all struggling to get the word out to the world that they are safe to visit. Tourism is way down, which is a massive blow to the economy,” said Giselle.

“Exaggerated media reports saying that the regions are on their knees and lying in rubble haven't helped our cause!” she added, explaining that the vast majority of the Umbria and Le Marche regions have been unaffected by the quakes.

To view the items on offer in the auction and register to bid, go to the auction website.

READ MORE: After the earthquakes, why you should still visit Central Italy