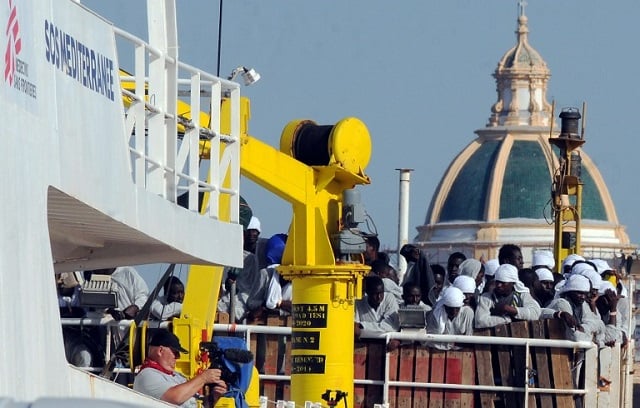 “After some calm days, migrants are arriving in large numbers, taking advantage of a window of favourable weather,” said a coastguard official.

Worsening living conditions in Libya are thought to be driving the surge in arrivals, together with fears that the oversea route may soon be closed.

The rescue was undertaken in 22 separate operations coordinated by the Italian coastguard.

One participant was the Aquarius, a humanitarian ship run by the NGO SOS Mediterranean and Doctors Without Borders (MSF), which said it saved 946 people, including 200 unaccompanied minors.

An MSF video showed three young children smiling and dancing on the ship to the sound of drumming.

At the end of the day 946 men, women and children have been brought on board the #Aquarius. All are full of the joy of just being alive. pic.twitter.com/BynEisuoR4

The migrants rescued by the Aquarius had been found drifting on nine wooden and rubber boats.

According to the Italian government, 16,206 people have been rescued in the sea by Friday – compared to 11,911 by the same time last year.

In February, Italy and Libya signed an EU-backed memorandum of understanding under which Italy's coast guard will help train and equip its Libyan equivalent to make it more effective in stopping boats.

But this may have had the immediate effect of encouraging more migrants to make the risky journey, as they fear the Libyan coastguard would simply bring them back to Libya.