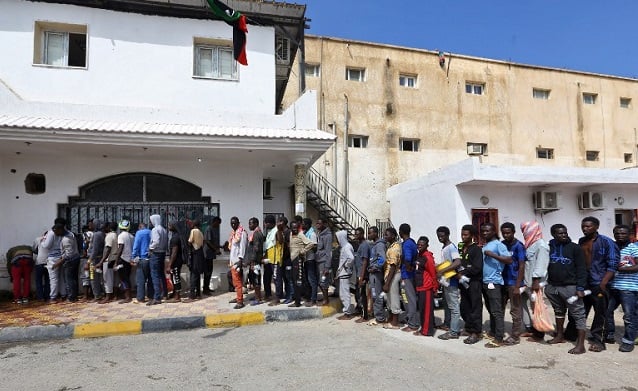 Migrants stand in a queue at the Tripoli branch of the Anti-Illegal Immigration Authority. Photo: Mahmad Turkia/AFP

But an appeals court in Tripoli this week suspended implementation of the deal, the justice ministry said Thursday.

“The justice ministry of the Government of National Accord confirms that the court is still examining the issue in order pending a ruling, and that no final judgement has been issued,” it said.

The GNA is not recognized by Libya's parliament, which backs a rival administration in the country's east.

The Tobruk-based parliament on February 8th declared the Italy deal “null and void”. It argued the GNA had “no legal status in the Libyan state” as it had not been approved by parliament.

European leaders have ramped up efforts to curb migration from Libya amid a sharp rise in the number of people trying to cross. One year after a controversial deal with Turkey to stop migrants setting out across the Aegean Sea for Greece, they are seeking a similar accord with conflict-hit Libya.

Human rights groups fiercely oppose the plan, saying they are concerned about mistreatment of migrants stranded in Libya.

Smugglers have taken advantage of lawlessness in Libya since the 2011 fall of dictator Moamer Kadhafi to establish the country as a major people trafficking route.

Most migrants set off from the country's west in the direction of Italy's Lampedusa, a 300-kilometre (190-mile) trip. The Spanish group Pro-Activa Open Arms said some 250 African migrants died on Thursday when two inflatable boats sank off Libya.