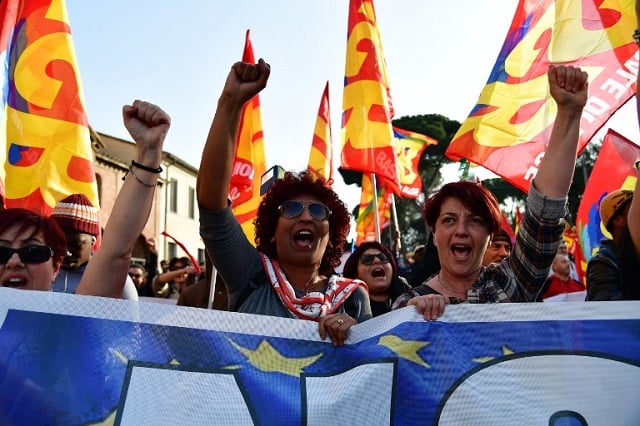 “There will be a 100th birthday of the European Union,” European Commission chief Jean-Claude Juncker said ahead of the summit, at which the leaders signed a declaration of intent for the next decade.

Meanwhile, tens of thousands of people took to the street for protests both for and against the European Union, with thousands of police officers on patrol to guard against potential clashes.

Four marches and two sit-in protests took place, with some groups protesting the EU, the euro, and European migration policy, while others marches in support of the union.

They all took place peacefully, thanks in part to the anti-riot police who arrived from across Italy to work in Rome on Saturday.

Here are some of the most striking photos from the weekend.


EU leaders meeting on the 60th anniversary of the Treaty of Rome. Photo: AFP


Marchers carried anti-EU signs saying 'No to banks, no to bosses, no to war'. Photo: Alberto Pizzoli/AFP


Civil society organizations protested against the EU's migration policy by floating an EU flag and life jackets in the Tiber river. Photo: AFP


Demonstrators from civil society organizations stood behind fences and laid out white body bags on the river bank. Photo: AFP


A selection of posters in support of the European Union. Photo: AFP


Marches from Greenpeace in support of Europe and its environmental policy. Photo: Vincenzo Pinto/AFP


A man protests against Britain's exit from the EU. Photo: AFP


Anti-riot police were on hand to ensure the protests went off safely. Photo: Alberto Pizzoli/AFP