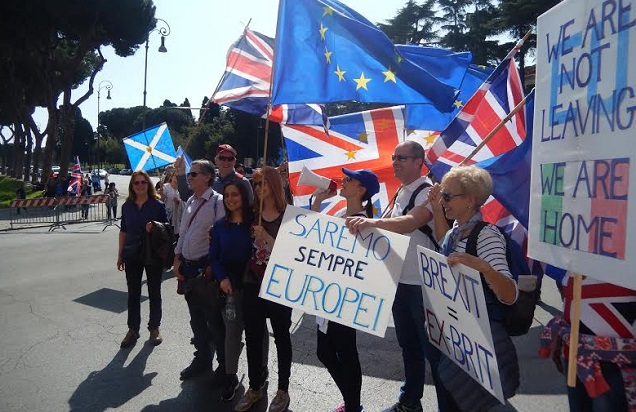 “This wasn't an 'anti-Brexit' march and we don't want to reverse Brexit – it was a march generally in favour of Europe,” explains Jeremy Morgan, the spokesperson for British in Italy.

The group has been campaigning to push the rights of British citizens abroad to the top of the agenda in Brexit negotiations.

British in Italy counts over 600 members and works together not only with other groups of Britons in EU countries, but also with the 3 Million, the biggest group of EU citizens living in the UK.

“These people shouldn't have to suffer because of the UK's decision to leave the EU,” Morgan adds. “This is a question of fundamental justice.”

Yet he argues that the potential “catastrophic consequences” to Brits abroad don't seem to have registered with those at home – or simply aren't seen as a priority.

“In the UK, I think there's a stereotype of Brits abroad sipping prosecco or champagne in the sunshine, a stereotype the pro-Brexit press has been hammering for years,” explains Morgan.

“Our concerns don't feature in most people's minds – some people think we 'deserve' to lose the right to work, access to healthcare or even face being sent back home, just because we chose to move to a warmer country! And the UK government – contrary to its claims – has made little effort to find out who British living in the EU actually are.”

In fact, the majority of Britons living in Europe are working, and their number includes young families as well as people who worked in England and then chose to retire abroad.

Morgan, a retired lawyer, moved to Spoleto in the green heart of Italy with his Australian wife three years ago.

“It's just not right to uproot people's lives, and if any one of the rights they currently have is taken away, some people will be 'sent back home',” he tells The Local. “People's ability to continue their lives and making a living depends on how this is resolved.”

The group has given evidence to the House of Commons Committee for Exiting the European Union, lobbied to get an amendment to the Brexit Bill passed in the House of Lords, and put their case to officials in Rome's British Embassy. The group which gave evidence to the House of Commons Committee, with Jeremy Morgan second from left. Photo: Private

Next on the agenda is lobbying European politicians, and Morgan and his colleagues are already in contact with politicians from Italy's ruling Democratic Party. While they were sympathetic to the group's cause and will be setting up a commission to look at individuals' rights in the negotiations, Morgan says he isn't sure many of those tasked with the decision-making fully appreciate the complexity of the issues, or the ways in which people have already been affected by the vote.

“We haven't had any hostility from Italians, so from that point of view it's OK, though it might be a different picture for European citizens in the UK,” he says.

However, while some people have had to seek medical treatment for anxiety over Brexit, the group has also had reports from others who have been given information by Italian local authorities which is probably not correct.


Some of the group at Saturday's March for Europe. Photo: British in Italy

The key points on the group's agenda are ensuring that reciprocal healthcare arrangements and mutual recognition of qualifications stay in place. While the former issue is particularly crucial for retirees, people in professions such as hairdressing – the largest professional group of Brits in Italy by some way, according to EU figures – or law would be affected by losing their right to work abroad if forced to re-qualify from scratch.

So far, Morgan is satisfied with the group's progress.

“I believe we've been successful in getting the rights of individuals moved to the top of agenda, both in the UK and in Europe,” he says. “Both sides seem to be saying that these will be prioritized so there's cause for cautious optimism – but there's so much that could go wrong. I'm not sure how hopeful I feel.”

As for when the affected individuals can expect a guarantee of their rights, that's equally unclear.

“We hope that this is discussed as the number one issue, before the many, many years we are told trade negotiations could take. It's urgent to look at the future of families on both sides of the channel.”