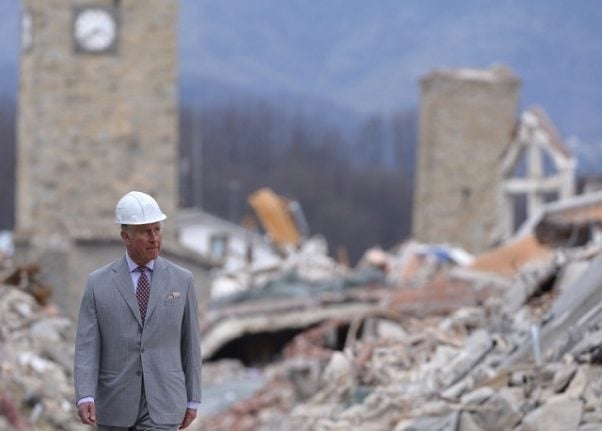 The Prince of Wales walked alone in silent contemplation through parts of the abandoned “red zone” where collapsed houses lie next to the ruins of a 13th-century Civic Tower in the historic hilltop town in central Italy.

“It's a scene of terrifying devastation,” he said as he passed in front of the destroyed Church of Sant'Agostino, where the only signs of life were stray cats that roamed the gardens of buildings flattened by the August 2016 quake. Wearing a hard hat and a grey pinstriped suit, he met the town's mayor, Sergio Pirozzi, who told him he had not been back into the red zone since the quake “and will not until the town is rebuilt. We have to look to the future”.

“I wish I could do more for you, your resilience is amazing,” the 68-year-old prince told a local man after shaking the hands of first responders. Charles also met those helping with the reconstruction after the disaster that killed nearly 300 people, including three Britons who were there on holiday.

The prince, who arrived by helicopter due to quake-damaged roads, placed a garland of yellow and white flowers on a memorial in the park where survivors had slept in the days immediately following the quake. At the time, many of the survivors were still waiting for news of their trapped loved ones.

“I told him I lost my husband that night, he was very moved, he embraced me,” Marina Torredi, 65, told AFP.

“It was a hugely emotional moment. I introduced him to Agostino, a rescuer who pulled me from the rubble that night – he said he was a hero,” she said. Survivor Carmine Monteforte, 75, who had been waiting for a glimpse of the prince along with a group of locals waving Union Jack flags, said he also got a big hug from Charles.

“It was a lovely gesture of human warmth, I teared up. His visit has certainly raised morale here,” he said. Pope Francis meanwhile urged officials to rebuild the historic city centres in northeastern Italy that were hit by a series of deadly quakes in 2012, during a visit to the towns of Carpi and Mirandola.

“Much has been done to rebuild, but it is more important than ever to recover the historic centres, places of memory that are essential for social and ecclesiastic life,” he said at the cathedral of Mirandola, where 23 people were killed and 14,000 driven from their homes in May 2012.

In Amatrice, Prince Charles met a woman who knew British husband and wife Maria and William Henniker-Gotley, who were killed along with a 14-year old Briton in the nearby hamlet of Sommati when the quake hit.

“I was a friend of Maria and William's, they used to come to our home and it is a huge, huge loss for us,” she told him.

Charles' Amatrice visit, which also saw him try the town's famous Amatriciana pasta sauce, was part of a European tour by the Prince of Wales and his wife Camilla designed to shore up relations with EU allies as Brexit negotiations get under way. The charm offensive, which started in Romania and ends in Austria on Wednesday, comes just as Britain this week officially triggered the Brexit process.

While Charles was in Amatrice, Camilla was visiting the Arcobaleno association in Florence which helps female victims of human trafficking – a hot issue in Italy during a time when the country is rescuing hundreds of thousands of migrants in the Mediterranean, including women.

The royals will be back in the Tuscan capital Monday to attend a reception hosted by the Palazzo Strozzi Foundation to mark the 100th anniversary of the British Institute of Florence, where Charles will be honoured as the “Renaissance Man of the Year”. The heir to the throne and the Duchess of Cornwall will meet Pope Francis and tour the Vatican the following day.

The stop in the beauty spot of Amatrice was not the prince's first to a quake-hit zone. In 2004, Charles travelled to the scene of an earthquake that devastated the ancient Iranian city of Bam, killing over 40,000 people.

After the Amatrice disaster, Queen Elizabeth made a personal donation to help re-house the homeless and restore the dozens of architectural gems in the region damaged by the 2016 quake.

By Ella Ide. All photos: AFP