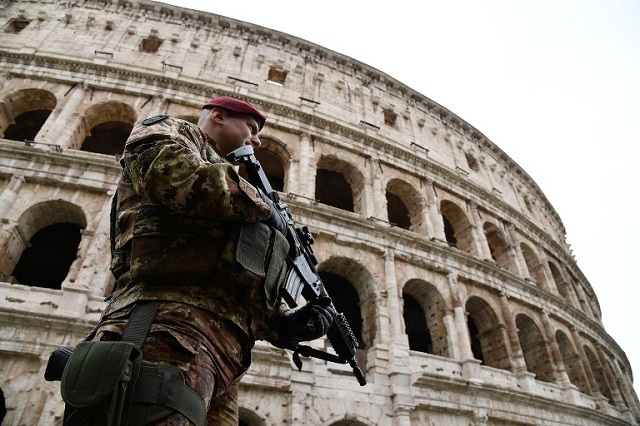 An Italian soldier at a checkpoint near Rome's Colosseum. File photo: Vincenzo Pinto/AFP

Around half a million tourists are expected in the Italian capital for the Easter weekend, which will see events such as the Via Crucis procession led by Pope Francis, and the traditional masses and foot-washing rites, watched by tens of thousands.

Non-religious events are also taking place over the weekend, including protests on Thursday and Friday, and a Serie A football match at the Olympic stadium.

“The police force is carrying out a detailed analysis of the affected areas, for which security services will be set up, including restrictions to vehicular traffic,” Rome's police chief said in a statement on Tuesday.

Officers would meet on Wednesday to discuss the details of the special measures, he added.

Extra officers will be deployed to the city's ports, train stations, and airports, as well as to St Peter's Square where Pope Francis will hold the Easter mass. In the historic centre there will be additional checks on cars and heavy goods vehicles.

The Colosseum Metro station will be closed from 3pm on Friday, and the amphitheatre itself will also close early on Friday, together with the Roman Forum, ahead of the Via Crucis procession.

Italy recently strengthened security measures, particularly in crowded areas, following the truck attack on London and ahead of a meeting of European leaders in the capital.

Measures put in place over the weekend of the Treaty of Rome celebrations included no-fly zones, major monuments closed to the public, armed officers brought in from across the country, and large swathes of the capital cordoned off.

For the Easter weekend however, security will not be so severe, with Interior Minister Marco Minniti saying Italy would “have strict controls in place, but without limiting the freedom of citizens to enjoy the holiday.”

“We are an open, outgoing country; we'll never be a fortress which stays closed, expecting the enemy,” he said.

Speaking on Monday, he had said that “the new terrorist threat is completely unpredictable”, describing terror groups as a “blind, irrational force which moves against the fundamental principles of humanity”.