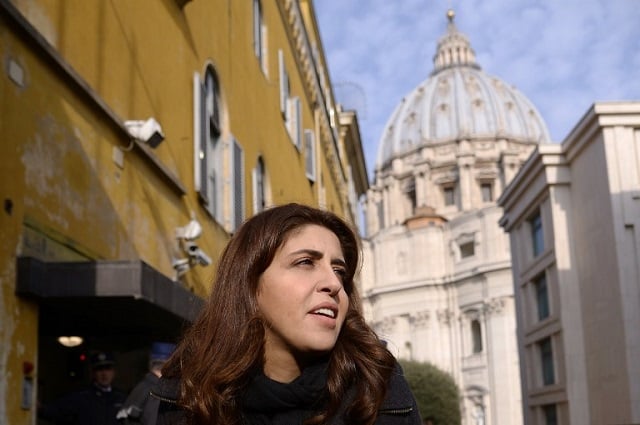 Francesca Chaouqui, a PR expert who was accused of leaking classified documents to journalists. Photo: AFP

The group has bought the rights to a series of books by Italian investigative journalist Gianluigi Nuzzi on the case, which rocked the Roman Catholic Church with their leaked accounts of mismanagement, corruption and waste.

“They have asked me to consult on the screenplay,” author Nuzzi told AFP on Friday.

The books include “His Holiness: The Secret Papers of Benedict XVI”, based on documents leaked by Pope Benedict's butler, and “Merchants in the Temple”, which describes internal resistance thwarting Pope Francis's efforts to clean up the church.

“From the moment I began writing these books in 2008 I entered an intriguing world of stakeouts,  meetings in dark places, retrieval of papal documents, discoveries of secrets and scandals,” Nuzzi said in a statement.

“It's a game of shadows made of weaknesses, sex, business and money. I want the world at large to know about the definitive battle between good and evil taking place in St. Peter's Square,” he said.

The first Vatileaks scandal saw Benedict's butler stand trial for leaking damaging information about Vatican in-fighting which plunged the Holy See into crisis and, it was widely suggested, contributed to the pontiff's decision to retire.

Nuzzi and a fellow investigative reporter were tried by the Vatican in the highly publicised “Vatileaks 2” case, but were acquitted. Among the most striking revelations in the books was that less than 20 percent of donations made by believers around the world under the Peter's Pence scheme ended up being spent on good works.

The rest was swallowed up by the Vatican bureaucracy, reportedly partly helping to subsidise the luxurious lifestyles of certain cardinals.

“Vatileaks 2” also ballooned into steamier fare, with allegations of sexual affairs, glitzy parties and secret plots in the corridors of power.

“I'm glad it is being done in English,” Nuzzi told AFP.

“It's an international story that involves not just the Vatican but a world spread across many countries”.