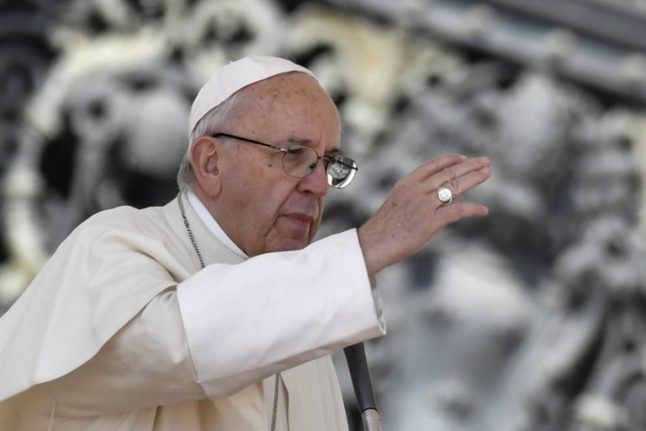 Security will be high for the Cairo visit after two bombings in Coptic churches earlier this month that killed 45 people, with the country currently observing a three-month state of emergency.

But the 80-year-old, who prefers face-to-face contact to pomp and circumstance, will shun armoured cars for a normal vehicle and electric pope mobile-style golf carts.

During the two-day trip, Francis will meet privately with the grand imam of Al Azhar mosque, Sheikh Ahmed al-Tayeb, an Islamic philosophy professor who visited the Vatican last year, easing a decade of tensions.

Relations were damaged under Francis's predecessor Benedict XVI over a 2006 speech in which he was seen as linking Islam to violence and 2011 comments condemning an attack on a Coptic church that Al-Azhar denounced as meddling in Egypt's affairs.

The pope, who has made interfaith dialogue and reconciliation a leading theme of his pontificate, will be joined at the conference by Ecumenical Patriarch Bartholomew, Archbishop of Constantinople, the spiritual leader of the Orthodox world and a close ally.

The Argentine will meet with the country's President Abdel Fattah al-Sisi and attend a reception with 1,000 guests.

The president, criticized internationally for human rights abuses, has nonetheless shown a certain openness towards the minority Christian community at home since taking power in 2014 and was the first head of state to attend a Christmas mass in 2015.

The head of world's 1.3 billion Catholics will round off the day with a private meeting with the Coptic pope, Tawadros II. They will walk on foot together to the Coptic church of Saint Peter and Saint Paul in the heart of Cairo, which was hit by a bomb attack in December claimed by the Isis group that killed 29 people.

The attack was the deadliest targeting the Coptic community since the 2011 suicide bombing that killed 23 people in Alexandria.

On Saturday, the crowd-loving pontiff will don his pastoral hat for a mass and meetings with the country's small Catholic community, estimated to number around 165,000.

“The pope wants to try to reestablish fraternal ties” with both Al-Azhar and Egypt, said Samir Khalil, a specialist in Islamic-Christian studies at the Pontifical Oriental Institute in Rome.

Egypt's Copts, who make up about ten percent of the country's population of 90 million, are the Middle East's largest Christian minority and one of the oldest.

“Their situation has changed over the past ten years under the influence of the Muslim Brotherhood, which has begun inciting anti-Christian sentiment, said Khalil, who pointed out that identity papers by law have to specify religious beliefs.

Poorly represented in government, Copts say they are sidelined from many posts in the justice system, universities and the police.

They feel, a high-ranking official in the Vatican said, like “second-class citizens”.

However, while decades of interreligious dialogue among the religious “elite” has yet to bear fruit on the ground, “having dialogue at all is already a great step,” he said.