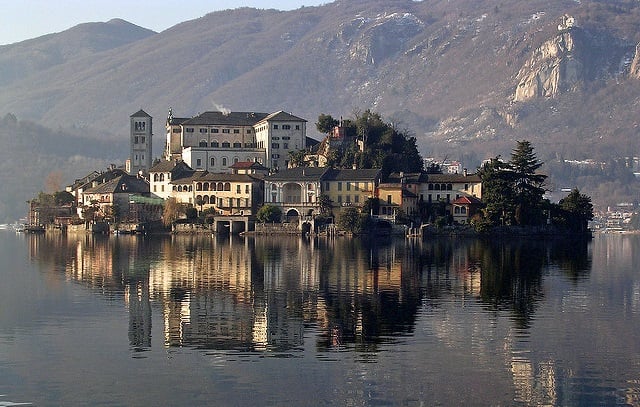 The shortlist has been drawn up by the 'Borghi più belli d'Italia' organization, which every year selects 20 villages to promote, chosen for their landscape, heritage, and culture.

And 2017 has been named as the 'year of villages' by Italy's Culture Ministry as the country turns the spotlight on its hidden gems and encourages more diverse tourist itineraries. While hotspots such as Venice have been forced to introduce measures aimed at restricting visitor numbers, these villages are comparatively untouched by travellers.

So from north to south and east to west, here are the most beautiful villages to visit across Italy in 2017.

Arquà Petrarca is a medieval village that preserves the charm of the past and is nestled in Veneto's Euganean Hills. First established in Roman times, the village gained fame after Francesco Petrarch, one of Italy's greatest poets, chose to spend the last years of his life in this peaceful village. In return, the village added his name to its own, and you can learn more about the poet's life in the house where he once lived.

Anything but ordinary, this village lay abandoned after the Second World War, before being brought back to life in the 1960's as an artists' commune, where creative types from all across Europe gather together to exchange their ideas. Soak up inspiration as you stroll the narrow alleyways and enjoy panoramic views over nearby Lake Como.

This village hosts the summer residence of the Pope. It is surrounded by the natural beauties and it is filled with archaeological sites.

Only 815 people live in this hamlet, which has previously been named as Budget Travel as one of the 'Best places in the world you've never heard of'. The houses and buildings are set into the rocky mountainside making for awe-inspiring views, and to enter you'll have to pass through a tunnel carved into the rock.

Located close to the Gorges of Alcantara) Castiglione di Sicilia was singled out by Borghi Belli judges for both its natural and historical heritage. Nestled on Mount Etna's north side, this tiny gem is worth the steep climb to explore its churches and piazzas, nearby vineyards, and of course the stunning views.

Clinging to a hillside along the Amalfi coast, this tiny fishing village is best known for spectacular sunsets and the nearby Grotta dello Smeraldo sea cave where the interior shimmers emerald green.

Its name translates as the not-very-appealing 'cold river' – because the river's water comes from natural springs set into rocks – but there are plenty of good reasons to visit Fiumefreddo. Travel around the different fractions to try out the local delicacies (not to mention the wine), and don't miss the palaces, churches, and towers.

Tiny Gressan isn't just known for its beauty, but also for two unusual Italian sports which are still played in this area: Palet, which is similar to boules or petanque, and Rebatta, in which players compete to throw a ball as far as possible by hitting it with a bat.

La Maddalena's history has been far from calm: In 1793, the island fought to defend itself against the French army and its young commander, Napoleon, and during the Second World War, dictator Benito Mussolini was held prisoner here. Today however, it's a peaceful and relaxing place to enjoy the summer season, renowned for its sandy beaches and ancient fortresses.

Surrounded by medieval walls, Montecassiano is also an'Orange Fla' village, a recognition of excellence from the Italian Touring Club, based on the historical heritage and the conservation of the cultural sites. Various medieval festivals are held here, the largest in the second week of June, but all year round you can enjoy the green landscape and historic buildings.

First built as a medieval fortress, Montegrifoldo has been the site of dozens of battles and was part of the Gothic Line, the Germans' last major line of defence as the Allies approached to liberate Italy – today, a museum tells the story of the war period. It's one of the best preserved villages in the country, the red hues of the bricks contrasting with the greenery all around.

Less chaotic than the nearby Lago Maggiore, San Giulio is an enchanting village set on an island, barely touched by tourists. The nearby Sacro Monte or Holy Hill, a site of pilgrimage made up of nine religious buildings, has earned a place on Unesco's World Heritage list. Orta San Giulio has long been a favourite of writers and was a popular stop on the Grand Tour thanks to the unspoilt beauty of its streets.

At the the most easterly point on the Italian mainland, you'll find Otranto. In Roman times it was a bustling city but these days it makes for a peaceful seaside break. The highlights are the lighthouse, the castle, and the cathedral – home to a stunning mosaic floor, and an eerie collection of the bones of martyrs killed in a 15th-century Turkish massacre.

Inhabited since 2000BC, this Umbrian hamlet overlooks Lake Trasimeno, the fourth biggest in Italy. You can still see the walls built to protect it from attacks from the Vatican State, Florence, Rome, and nearby Perugia.

There are more ancient walls, churches, and towers to be found in hillside town Rocca San Giovanni – but the main attraction are the views across the Adriatic Sea.

Between Florence and Livorno, tucked away in the Tuscan hills is Suvereto, an art- and history-rich town set in the green valley of the River Cornia. Enter through its medieval walls and wander the atmospheric streets, or explore the surrounding olive groves and vineyards.

Perched on a cliff, Tellaro is a beautiful fishing village along the Gulf of Poets and home to one rather strange legend: local folklore states that the village was saved by a giant octopus that saved residents from a pirate attack by climbing the church tower to ring the bells. We can neither confirm nor deny the tale, but if true, the giant octopus did us all a favour – Tellaro is a maze of beautiful streets which are worth wandering through.

Home to just 690 people, Vastogirardi has been home to shepherds and farmers for centuries and centuries. Remote and peaceful, it's a perfect rural escape and you can see the remains of walls and ancient religious structures.

Venzone, considered a 'national monument' since 1965, was voted the overall most beautiful village for 2017. It's known for the local lavender, annual pumpkin festival, and a creepy display of mummies, but mostly for its incredible recovery following a deadly earthquake: the local cathedral was destroyed by the tremors, but rebuilt painstakingly with every stone returned to its original place.

Just a 70km drive from Milan, Zavattarello is surrounded by nature, mountains, and woods. The picture below shows the village fort, a formidable architectural complex which was able to resist several sieges and is studied by military architects today.