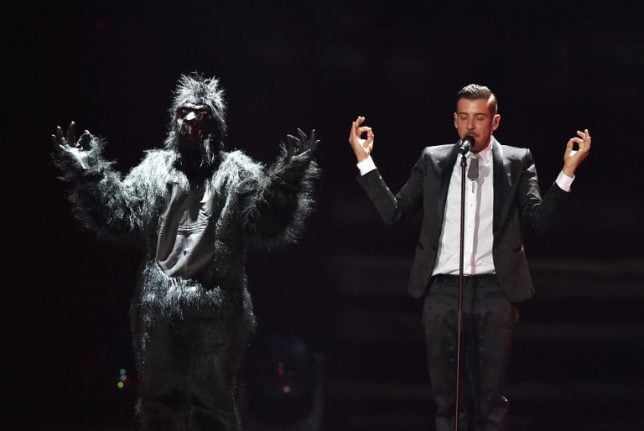 Tuscan singer-songwriter Francesco Gabbani is flying the flag for Italy this year.

Gabbani was born into a musical family; in fact, his parents ran the only music shop in the small town of Carrara while he was growing up, and he started his career as the drummer for his brother's band.

After learning the drums, Gabbani also mastered the piano and bass guitar – and he's worked as a stage technician and sound engineer. He produced his first album at the age of 18 as part of band Trikobalto, which supported the Stereophonics on tour in Italy, before going solo. Flying the flag for Italy on the EuroVision red carpet. Photo: Sergei Supinsky/AFP

'Occidentali's Karma' (Westerners' Karma) – a catchy tune exploring the fascination Western cultures have with Eastern spirituality. In his own words, it's about “our clumsy attempt to ape Eastern habits to find inner peace; the truth is that in other people's cultures we will always be tourists”.

Look out for references to Nirvana, Buddha, and chanting mantras, as well as the catchy refrain “the naked ape is dancing”.

He'll be joining Gabbani on stage, in a nod to the book The Naked Ape by zoologist Desmond Morris, which compared humans to animals and examined their behaviour. But – plot twist – the title doesn't actually refer to apes, but rather to humans themselves: the only one of almost 200 species of monkeys and apes not be covered in hair.

And what about that dance?

Well, the dance is the best part of the song. Gabbani and the man in an ape costume imitate classic yoga and meditation poses – the idea is to mock Westerners who adopt aspects of Eastern culture they don't understand.

And it's safe to say the routine has caught Italy's imagination. After Gabbani debuted the dance at Sanremo Song Festival earlier this year, social media erupted with videos of people attempting the moves, and thousands of parodies have surfaced. Our favourite is this version with dancing nuns.

Want to learn the routine yourself? Here's a video of Gabbani himself teaching the moves.

How was the entry chosen?

It doesn't always work out that way though – sometimes the winning act snubs the cheesy contest so an alternative act is picked to represent Italy on the Eurovision stage. This was the case last year, when Sanremo runner-up Francesca Michelin was chosen.

2017 was actually Gabbani's second Sanremo win: the previous year he scooped the top prize in the newcomers' contest, and he's the first artist to win in both categories in consecutive years.

What are Italy's chances?

Pretty good! Gabbani is the bookies' favourite to win, but this is EuroVision, so anything could happen.

But at the very least, he'll be singing in the final. As one of Eurovision's 'Big Five' – the countries that give the most financial backing to the song festival, Italy automatically secures a spot in the final, along with France, Spain, Germany and the UK.


READ ALSO: Everything you need to know about Spain's Eurovision hopeful