Francesco Schettino, dubbed “Captain Coward” by the press for abandoning the stricken ship, passed through the gates of the Rebibbia jail in Rome as soon as the judges ruled.

Schettino, 56, was convicted in 2015 — three years after the incident — of multiple counts of manslaughter, causing a maritime accident and abandoning ship before all passengers and crew had been evacuated.

“He said 'I trust in the justice system, the verdict must be respected. I'm handing myself in right now',” his lawyer Saverio Senese said after speaking to Schettino by telephone.

Alessandra Guarini, a lawyer for relatives of the victims, said: “Justice has finally been served. I hope this brings a bit of serenity to those who lost their loved ones.”

The victims included a five-year old girl and her father, a musician who gave up his seat in a lifeboat for someone else, and a woman who died on impact when she plunged from the sinking liner into the freezing waters.

“Schettino really deserved this sentence. For his lies and for the lack of respect he had, even afterwards, towards the victims of that terrible shipwreck,” said Elio Vincenzi, husband of a woman who drowned.

Prosecutors argued that Schettino's recklessness was to blame for the fate of the giant ship, which struck rocks off the Tuscan island of Giglio on the night of January 13, 2012, and toppled over.

Schettino was widely ridiculed during the trial for insisting he did not abandon ship but slipped off the Costa Concordia as it rolled over, falling onto a lifeboat which carried him ashore against his wishes.

In a widely-quoted phone call a coast guard official is heard upbraiding Schettino and ordering him to “get back on board, for fuck's sake” — an order the former captain refused to follow. The wrecked cruise liner Costa Concordia in the harbour of the Tuscan island of Giglio on January 16th, 2012, having run aground after hitting underwater rocks three days earlier. File photo: Andreas Solaro/AFP

Schettino's lawyers insisted the accident and its deadly consequences were primarily due to organisational failings for which the ship's owner, Costa Crociere, its Indonesian helmsman and the Italian coastguard should have shared the blame.

“Schettino is the only one to have paid a price. He was made the scapegoat,” lawyer Senese said, adding that the defence team would now consider an appeal to the European Court of Human Rights.

The ex-captain “admits he is responsible but not that he is guilty, because on the Concordia there was a command team, he was not alone and the ship had many problems,” he added. 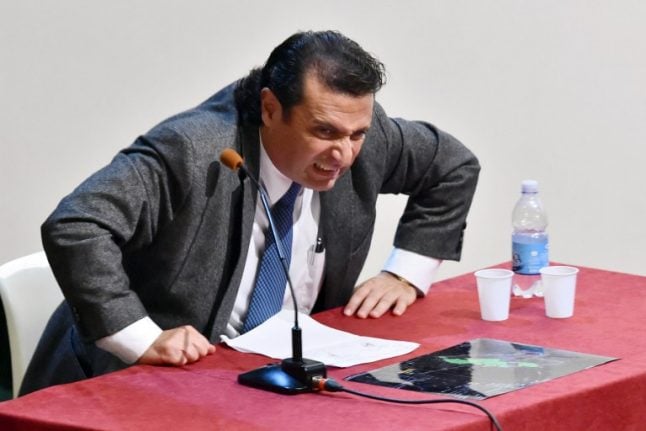