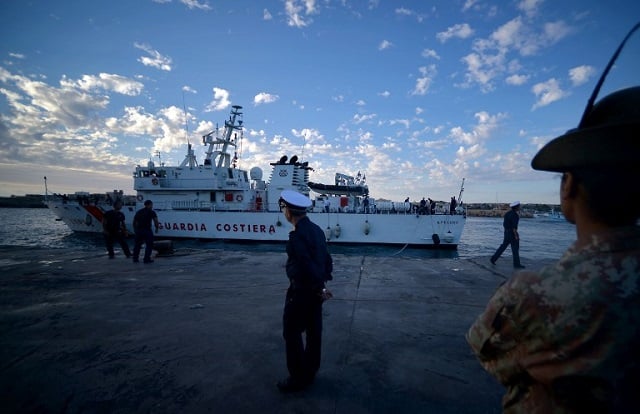 File photo of a coastguard boat arriving at Lampedusa. The man is accused of organizing the packing of migrants onto a boat that sank off the island in 2013, killing 360. Photo: AFP

Sicilian prosecutor Francesco Lo Voi hailed the arrest as “a turning point in the fight against human traffickers” after months of trying to break into a ring of smugglers shipping migrants across the Mediterranean.

Medhanie Yehdego Mered, 36, is accused of being “the General” of one of the largest migrant trafficking networks, with branches in Eritrea, Ethiopia, Libya, Sudan and the United Arab Emirates as well as in several European countries.

Investigators suspect him of organizing since 2013 the often deadly journeys of hundreds of people a month – especially young people from the Horn of Africa – across the baking Sahara and out to sea towards Italy.

He ended up on an international wanted list after being identified as the man who organised the packing of migrants onto a boat that sank off Lampedusa in 2013, killing at least 360 people in one of the worst disasters in the Mediterranean.

The “cynical and unscrupulous” Mered, who reportedly styled himself on ex-Libyan dictator Moamer Kadhafi, had been “continuously and constantly reaping vast profits while showing a contempt for human life,” according to a joint statement by Sudan, Italy and Britain announcing his arrest on May 24th last year.

But images of a frail young man in a red shirt being marched off a plane in Italy sowed the first seeds of doubt.

Some who had known “the General” said the police had the wrong man. The handcuffed prisoner was instead identified by relatives as a refugee, Medhanie Tesfamariam Berhe, then a 29-year-old carpenter.

“This is not the General. He doesn't even speak Arabic,” Tasfie Haggose, an Eritrean refugee in Khartoum, told AFP.

The trial against him went ahead, and the prosecution will call its last witnesses for a hearing in Palermo this month.

But the accused man's lawyer, Michele Calantropo, says it is a case of mistaken identity.

“At the moment, there is nothing” that proves his client is the wanted trafficker, he said.

Calantropo says he has 42 witnesses and experts ready to testify in the coming months that the man behind bars has only one thing in common with “the General”: his first name, Medhanie.

This was the name flagged by Britain's National Crime Agency (NCA) in 2016 when it heard someone going by that name calling the tapped phone of a suspected smuggler in Libya.

The man who made the calls was tracked down and arrested in Khartoum. But while prosecutors say the calls were made to organize migrant trips, Calantropo says his client was just looking out for loved ones heading to Europe.

Prosecutors said two Eritrean translators had testified to police that the arrested man's voice matched a 2014 recording of “the General” captured by wiretap, though standard voice recognition software failed to produce a result.

Although the smuggling kingpin had been wanted internationally since 2015, investigators knew little about him.

The prosecution has deemed it irrelevant that the man behind bars is six years younger than the suspect and does not resemble a wanted photograph released by police.

An NCA spokesman told AFP that it “remain(s) confident in our intelligence”. But the man has had a lonely wait for justice. Since Italy considers him to be Medhanie Yehdego Mered, the family of Medhanie Tesfamariam Berhe is not allowed to visit or contact him by phone.

“I was the only one who could wish him happy birthday” when he turned 30 in early May, Calantropo said.