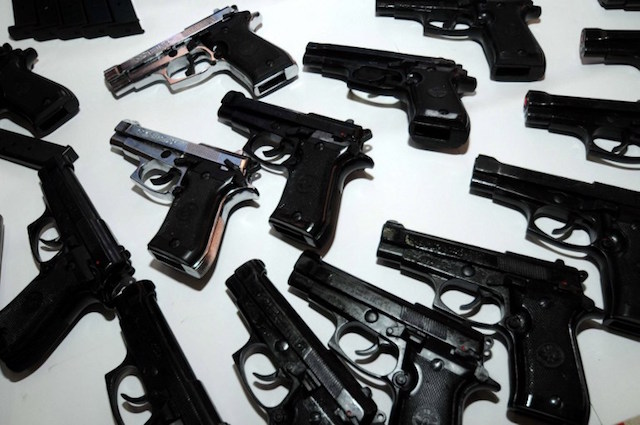 Weapons manufactured by a veteran Cosa Nostra weapons maker displayed by Italian police. File photo: Marcello Paternostro/AFP
The former “boss of bosses” was arrested in 1993 after ruling Sicily's Cosa Nostra with an iron fist for over two decades. He is believed to have ordered more than 150 murders.
GALLERY: Sicily's 10 most notorious godfathers
Riina, nicknamed “The Beast” because of his cruelty, is jailed for life in Parma for sanctioning scores of killing, including as the mastermind behind the assassinations of anti-Mafia judges Giovanni Falcone and Paolo Borsellino in 1992.
But the 86-year-old suffers from cancer and other ailments, his defence lawyers told the court, and should have his sentence reduced or be allowed to serve it out under house arrest.
On Monday, the appeal court agreed and asked the original court in Bologna to reconsider his situation.
READ ALSO: Mob boss sparks fury with 100th birthday bash
Last year, the Bologna court had said Riina could be treated for his serious health conditions while incarcerated, but refused to entertain the idea of setting him free.
Riina still represented a “significant danger” and had never disassociated himself from Cosa Nostra, the Bologna court said, adding that there was a risk he could re-offend.
But the higher Italian court of cassation said the Bologna tribunal had failed to take certain factors into account, including Riina's “physical deterioration”.
Riina has kidney cancer and suffers from various neurological and cardiac ailments, the court said.
READ ALSO: The godfather: Church fumes in Sicily as mobster's son gets offer he can't refuse