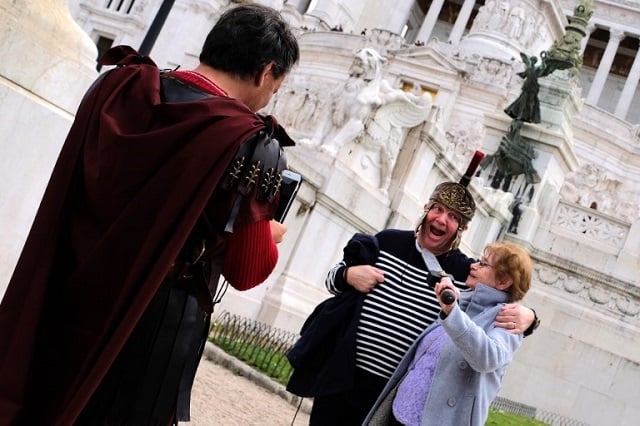 A man dressed as a centurion jokes with tourists. Photo: Alberto Pizzoli/AFP

Rome's local authorities have been battling with the gladiators (which is what they call themselves most of the time, despite usually dressing as Roman centurions) for years, accusing the street artists of over-charging, intimidating, and even pick-pocketing unsuspecting tourists.

Now, anyone caught dressed as a historical figure for photos and video will face a fine of up to 400 euros – even if they weren't actively requesting cash.

Similar bans were in place between November 2015 and April this year, when a court overturned the prohibition, siding with a group representing street artists and centurions.

Speaking at the weekend, Raggi said the new ban was justified because the costumed figures “have a negative effect on road traffic and prevent the full enjoyment of the monuments and scenic beauty of the city”.

She also said those who worked in the trade were “persistent and sometimes aggressive towards visitors” to the ancient city.

Back in 2002, a law obligated costumed 'street actors' to pass an exam, including English language and a general culture test, before they could work in the capital.

The first ban in 2015 introduced a €400 fine for those caught in costume, and updating these regulations was one of the first things mayor Virginia Raggi did after her election.

A viral video in 2015 showed a Romanian TV crew getting their wallets stolen by a group of Colosseum centurions who took €100 as compensation for a couple of photos in front of Rome's most iconic building.

READ ALSO: The free phone apps you need for a hassle-free visit to Rome