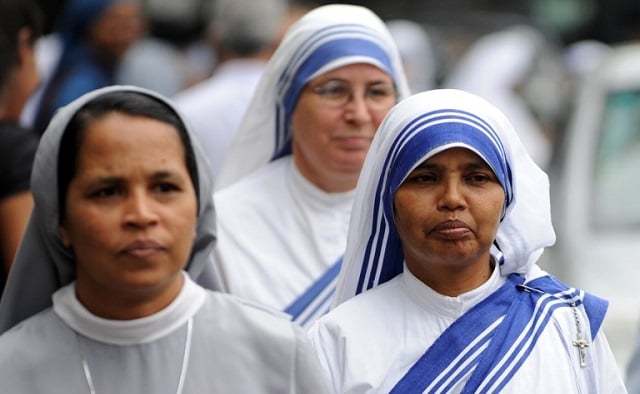 The head of the Mother Teresa's Missionaries of Charity, sister Mary Eliza (R) flanked by Catholic nuns in 2011. Photo: AFP

“Holy Mother Teresa of Calcutta is a universal symbol, beloved by believers (and) unbelievers,” said Cardinal Jose Saraiva Martins, 85, an ex-prefect of the powerful Congregation for the Causes of Saints.

“It is absurd that taxes will now have to be paid on her sari. It's the first time I have heard anything like it,” he was quoted as saying by the online version of the Italian weekly Panorama, which hits shop shelves on Thursday.

The sari was reportedly recognized as an Intellectual Property of the Missionaries of Charity by the trademarks registry in India on the day the revered Catholic nun was raised to sainthood in September last year.

It means those using images of the sari – in anything from books and films to calendars – will have to pay.

“It certainly does not honour the saint's memory,” Saraiva Martins said.

Panorama added that the news had upset many at the Vatican to the point that Pope Francis may be moved to speak out.

The white sari, now worn by nuns belonging to the Missionaries of Charity throughout the world, is a symbol of purity, while the three blue borders represent poverty, chastity and obedience.

Mother Teresa won the 1979 Nobel Peace Prize and was revered around the world as a beacon for the Christian values of self-sacrifice and charity.

She spent all her adult life in India, first teaching, then tending to the dying poor for decades before her death in 1997 at the age of 87.

READ ALSO: Meeting the Italian tailor making robes for the stars of the Church