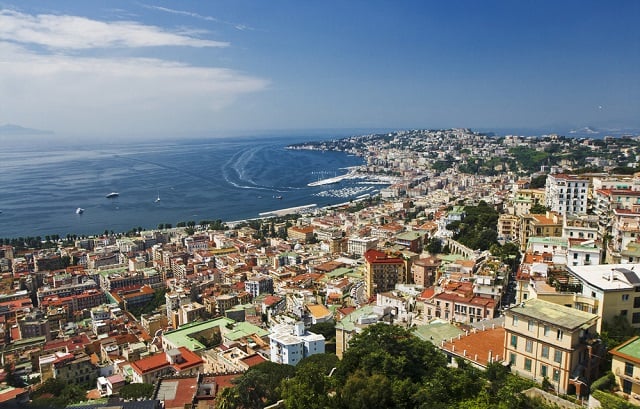 A view over Naples in Campania. File photo: LisovS/Depositphotos

Under the caption 'Bad World', the headline said the newspaper had revealed the world's ten most dangerous cities, “from drug cartel run hellholes to war-ravaged cities where headchopping ISIS fanatics run wild”.

Naples was the only Western European city mentioned in the article, alongside Kiev, Somalian capital Mogadishu, Perth in Australia and St Louis in the United States.

The article didn't include references to any data or statistics, but used six categories to judge the 'danger level' of the cities: terrorism, human rights, riots, murder, gangs, drugs. The latter three categories were problems in Naples, according to Birchall.

Naples mayor Luigi De Magistris said the report from The Sun was “laughable”.

“It is a false, superficial judgement, from someone who has evidently never spent a day of his life in Naples, a city full of problems but certainly not in the place in the world rankings where the Sun puts it,” he added.

And the Italian Embassy in London noted that the city is not included in any official index of the most dangerous cities in the world. “The Sun must have had a sun stroke… confusing fiction with reality when it listed the city,” wrote the embassy in a statement accompanied by the hashtag '#FakeNews'.

It is true that the Camorra crime syndicate continues to have a hold over the city. Many of the city's notorious bosses have been imprisoned, but the rise of a younger generation of clan leaders has had unintended consequences, with several shootouts in the city.

These have affected innocent bystanders as well as members of rival groups; in January 2017, a ten-year-old girl got caught up in one shooting. The number of murders reported in the city saw an increase over the past 12 months to 77, 38 of which were linked to organized crime, according to a report in the Corriere del Mezzogiorno.

But similar increases in violent gang-related crime have been seen across Europe, including in London, where statistics from London Metropolitan Police showed a 14 percent rise in the murder rate in the English capital and a surge in gun and knife crime over the past 12 months.

And statistics show that Neapolitans report fewer crimes than residents of many other large Italian cities – particularly the kinds of crimes likely to affect tourists. In 2016, figures from the Interior Ministry showed that a total of 4,397 crimes reported per 100,000 inhabitants – a smaller proportion than in Rome and Milan.

The city saw a year-on-year increase in pickpocketing of 11 percent, bucking the nationwide trend of a decline in such crimes, but despite this, pickpocketing was most common in the north, with Rimini, Bologna, and Milan home to the most light-fingered thieves.

In spring this year, mayor De Magistris announced the launch of an online platform aimed at combatting 'fake news' and rumours about Naples, which has gained a reputation for violence thanks to films and TV series such as Gomorrah.

The Difendi La Citta (Defend the city) initiative invited residents to report those who defamed the Campanian capital, with city authorities promise to use any money gained in damages to improve public services.

At the time, several regular visitors or expats in the southern city told The Local it didn't deserve its dangerous reputation.

“I'd always heard Naples was very dangerous for tourists, and as a gay married couple we had also heard it was an intolerant city,” said Rob Vance from San Francisco, who has visited Italy each year since 2007. “But we felt comfortable everywhere we went and have told all our friends and family to visit too.”

READ ALSO: How I fell in love with Naples: a city full of contrasts