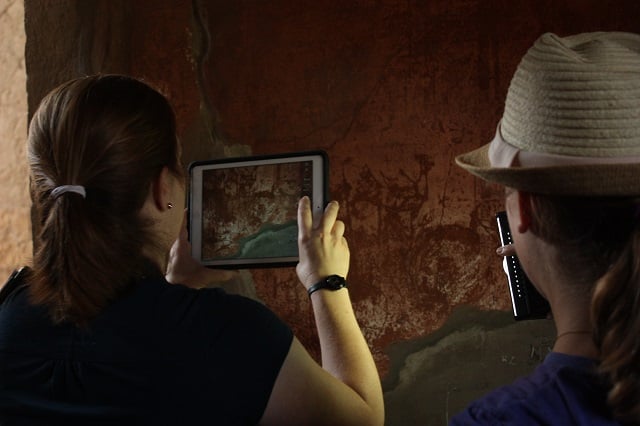 Project Director Rebecca Benefiel uses an iPad to take a photograph of a drawing in Herculaneum. Photo: Ancient Graffiti Project

Not far away lies Herculaneum; buried in the same eruption, it is less well known among tourists but just as much of a treasure trove for archaeologists and historians. There are two main reasons for this.

Firstly, the cities are well preserved. The eruption may have wiped out their inhabitants, but it also ensured that they were kept alive in historical memory, thanks to the metres of ash that shielded the ruins and remains from the elements. Historians have therefore had access to details which in other cities they can only guess at.

This is particularly true in Herculaneum, which was buried by volcanic ash from the ground up rather than being buried from above like Pompeii, leaving many of the buildings' upper stories in tact.

Just as crucial was the immediacy of the eruption. Where cities decay naturally, remains tend to bear witness only to the wealthiest; emperors or dignitaries who could afford palaces and ornate tombs, or warriors and merchants significant enough to be written into the historical record.

But the ash didn’t discriminate. In Pompeii and Herculaneum, archaeologists have found evidence of the people and parts of life which written records may have either dismissed as insignificant or ignored to suit the writer’s agenda.

Some of the most fascinating insights into Roman life have come from a surprising source: the Ancient Roman graffiti left on walls around the city.

“The people who left graffiti were not the elite, famous Romans we read today; they were everyday people who were living normal lives before disaster struck,” says Jacqueline DiBiasie Sammons, a field archaeologist who studies and documents the inscriptions for the Ancient Graffiti Project. The project has prioritized applying new digital technologies to ancient graffiti in order to discover the best techniques for recording these inscriptions, such as computational photography. The scrawls have helped reveal what certain buildings were used for and how ancient Romans spent their free time, shedding light on love, rivalries, and gladiator fights from a rarely seen perspective.

The graffiti is also of huge interest to linguists, providing a record of vulgar Latin; the language as it was used by ordinary people. And the writings show that some things never change.

READ ALSO: Did the men of Pompeii have a penis problem?

Vulgarity is common in the writing on the walls, from Latin insults to sexual messages – though while some of the phallic inscriptions fall into this genre, Romans viewed the symbol as a sign of good luck, so it would be inscribed into walls of homes and public buildings out of superstition too.

In a time before social media – or even much available paper – the walls were an easy way to communicate. While today’s baby boomers criticize youngsters for documenting the minutia of their lives on Facebook, it turns out the Romans were more or less doing the same thing.

“The most popular kinds of graffiti are ‘I was here’ messages, single names, and greetings like ‘Marcus says hello to Fortunata’,” explains DiBiasie Sammons.


A drawing of a bird in Pompeii's baths. Photo: Carole Raddato/Wikimedia Commons

Nor were the Romans above the occasional over-share or humblebrag. In a Herculaneum latrine, one inscription declares: 'Apollinaris, doctor of the emperor Titus, defecated here well.'

Another, left by two brothers in the baths, says: 'Two companions were here and because they continuously had bad service in every way from Epaphroditus, they threw him out with no delay. They spent 105 1⁄2 sesterces [an Ancient Roman coin] most pleasantly while they made love.'

But the writings also served a practical use, different to today's graffiti which is generally viewed as either vandalism or art. Thousands of inscriptions were made at the sites of Pompeii and Herculaneum, and they were not scratched out or covered over to hide them, suggesting it was a commonly used and socially acceptable method of communication.

“Graffiti appear in virtually every type of space in the cities: houses, public buildings, temples, and even tombs. The Romans clearly had different ideas about public versus private property than we do,” explains DiBiasie Sammons.

Numerals and dates were a common type of graffiti, keeping track of economic transactions or recording important events.

And the language used was often grammatically complex or intricate, from lengthy prayers and poems to alphabets (in both Greek and Latin), riddles, and examples of wordplay which show graffiti was a means of education.

Then there are the pictures. In addition to the aforementioned phalluses, DiBiasie Sammons says gladiators are a common motif, demonstrating that this was the main form of entertainment at the time. In some cases, these drawings are accompanied with the fighter’s name, and tallies of their fights and victories.

Geometric shapes such as compass circles were also popular, as were animals, such as this rooster and the horse below.


A graffiti drawing of a horse in Pompeii. Photo: Carole Raddato/Wikimedia Commons

Early excavators recorded the graffiti they found when first uncovering the towns, which has been crucial to historians. Only a small number of the writings they recorded can still be seen today, and these require special training to hunt down.

Romans scratched their messages into walls with metal tools and they can be hard to find – as Field Director, DiBiasie Sammons helps train archaeologists in how to find the scribbles using a flashlight, and how to interpret them.

But although these towns offer a breadth of information compared to other sites, there are some mysteries researchers have still been unable to solve.

“One particular inscription that has stumped scholars since it was discovered is one thought to be a grammatical exercise,” says DiBiasie Sammons. “ It contains groups of letters in columns, but the columns cannot be put together to make any logical sense.” In other cases, the writings have been a valuable perspective alongside the literary record, leading historians to revise their understanding of the era. This is particularly apparent when it comes to marginalized groups such as women and slaves.

“Graffiti indicate that a much greater proportion of women was literate than has often been assumed,” says DiBiasie Sammons. “One of my favorite graffiti from Pompeii (near the Theater) says: “Methe, slave of Cominia, from Atella loves Chrestus. May Pompeian Venus be good to them both and may they always live in harmony.”

“This provides evidence of a literate woman who was also a slave. She used complex grammar to express this very sweet and touching message.”

The archaeologist is currently working on a project about a man who left several graffiti in Pompeii, and went by the name of Crescens.

“Crescens was a fuller, an ancient dry-cleaner, which is an occupation we would not expect to have a high degree of literacy. He wrote dozens of graffiti, many of them salutations to his fellow fullers. One example says: “Crescens says hello to the fullers here and everywhere.”

In addition to her fieldwork, DiBiasie Sammons also works on the Ancient Graffiti Project, led by Project Director Rebecca Benefiel, digitizing the ancient inscriptions from Pompeii and Herculaneum. They are all added to an online search engine where users can look for writings by location, filters, and tags.

The aim of the project is to make these writings accessible to anyone who is interested, so that more people can learn about everyday life before the eruption, and get a rare glimpse inside the heads of Ancient Romans.