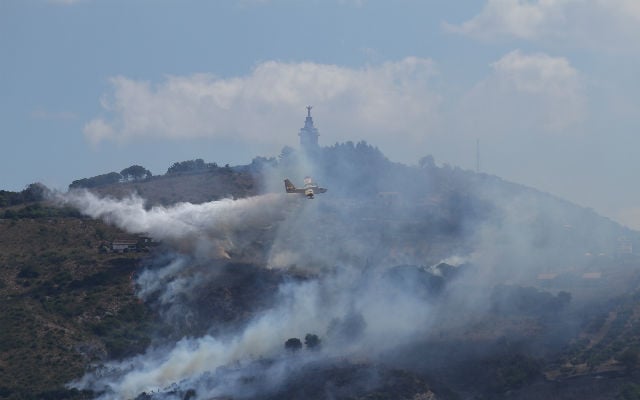 More than 50 bush fires have forced hundreds of residents to evacuate their homes in southern Italy. Tourist facilities, schools and public places were also evacuated as a precaution. One resident confirmed to The Local Italy that he was forced to evacuate his rented tourist villa.

In Giugliani di Campagna, a man died after falling from the roof of his burning warehouse.

In the town of Terradura, the fires reached the city centre, according to Repubblica. Even the supposedly fire-resistant helipad in Cilento was evacuated.

The fire department in the region is fully stretched, according to local newspaper Lecce Prima, with all units preoccupied this week with extinguishing fires across the province.

In another town, Galatone, a technical institute caught fire with scores of school children inside before a local man managed to quell the flames.

Bush fires frequently affect Italy during summer months, but this year's record temperatures mean authorities are struggling to contain the flames. Fires have destroyed olive groves, farms, woods and fields since early May in the south this year. Most of the fires are started by human activity, voluntary or involuntary, says one key official.

“You can count the fires that are caused by natural causes, like lightning or auto combustion, on one hand,” Colonel Mauro Capone, head of the forestry police, told ilpost.it

Since June 15, Italian fire services have responded to 432 incidents by plane, nearly double the 262 fires in June/July 2012, according to Repubblica. Twenty-eight planes are operating from 14 bases to prevent the spread of the fires. A 22-year-old and a 24-year-old man have been arrested by police, suspected of having started a major fire in a pine forest near Rome.

More than 26,000 hectares of bush land burned down in June 2017 alone, more than 93 per cent of the total land lost to fires in 2016, according to Lega Ambiente, an environmental watchdog.