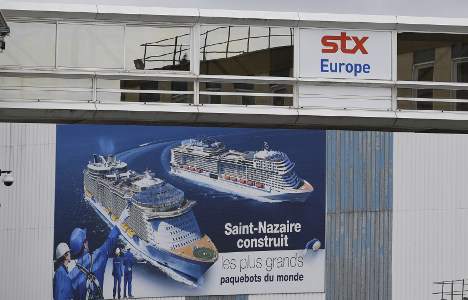 French Economy Minister Bruno Le Maire, in Rome for talks, said in an interview with the Corriere della Sera daily that a deal with Fincantieri might not be thrashed out.

“We will be forced to consider other options,” he said in reference to the Italian state-owned shipbuilder, “if the negotiations… don't go well,” adding: “But I hope that won't be necessary.”

However a joint statement later said that a summit between French President Emmanuel Macron and Italian Prime Minister Paolo Gentiloni, set for September 27th, would aim to find a “mutually acceptable” outcome.

The French government sparked the row last week by temporarily nationalising the STX shipyard after backsliding on a deal with Fincantieri agreed by then French president Francois Hollande in April.

The deal gave Fincantieri a controlling stake in the facility in return for which the Italian company gave job guarantees.

But on taking office in May centrist Macron said he wanted to renegotiate. France has since been pushing for a 50-50 split between Fincantieri and STX's French shareholders – a proposal rebuffed by Italy.

The shipyard, in the western port of Saint-Nazaire, has turned out some of the world's biggest cruise liners and also builds warships.

Just hours before talks with Le Maire, Italian Finance Minister Pier Carlo Padoan told AFP that Finantieri “must have at least over 50 percent”.

Italy 'won't be pushed around'

After meeting, however, the joint statement appeared to be an effort to alleviate the discord.

“The Italian and French governments express their common desire to overcome their differences regarding the capital structure of STX,” it said.

On the eve of Tuesday's meet, Gentiloni had said Italy would not be pushed around.

“Let's see if any fresh proposals are forthcoming. We will defend Italian interests calmly but firmly,” he said in a television interview.

Italy has made much of the fact that South Korea's STX Shipbuilding – the outgoing owners – held a six percent stake, but Paris has refused to let Rome hold a 51 percent stake.

Italy's frustration “is understandable, but the economic situation was completely different. The shipyard was in serious difficulty, now it is profitable and has 11 years of orders,” Le Maire said.

The French minister said Fincantieri may not have a majority stake, but it would effectively manage the company.

But Padoan said that was not good enough, and Italy “should have at least more than 50 percent, considering that the Koreans had two-thirds”.

“None of our decisions are anti-Italian, they are driven by legitimate concerns over two points,” Le Maire said.

The first is job protection, the second is keeping shipbuilding skills in France rather than outsourcing to China.

Padoan said the government and Fincantieri “have given all guarantees in terms of protecting jobs and technologies”.