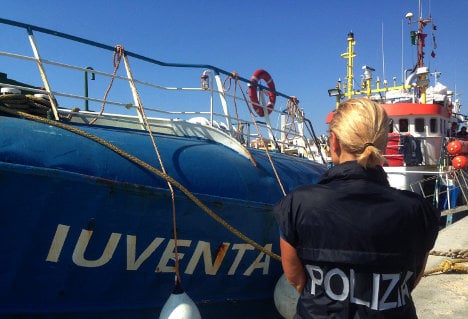 The twin moves came as new figures revealed a surprise drop in July in the number of mainly African asylum seekers and economic migrants arriving at the country's southern ports, suggesting efforts to close the Libya-Italy route into Europe could finally be bearing fruit.

The Italian parliament gave the go-ahead for a naval mission in support of the Libyan coastguard's fight against the people traffickers behind the surge in migrants attempting to cross the Mediterranean.

As part of the mission, approved by the Libyan authorities, the navy patrol boat Comandante Borsini entered the North African state's territorial waters on Wednesday afternoon, en route for the capital Tripoli, the navy said.

On board was a small advance team charged with coordinating planned joint actions with the Libyan coastguard.

The number of migrant arrivals in Italy in July was down dramatically on the same month last year, suggesting efforts to train up and better equip the North African country's coastguard could already be having an impact.

Arrivals for the first seven months of this year were 95,214, up 0.78 percent on the same period last year.

The new naval mission is expected to involve a logistics ship and maintenance support for the Libyans, as well as the Comandante Borsini.

Rome had initially hoped to send six ships into Libyan waters but had to downsize the mission after objections from the fledgling administration in Tripoli.

Some 600,000 mostly African migrants have arrived in Italy from Libya since the start of 2014, putting the country's reception facilities under strain and the centre-left government under pressure with elections looming next year.

Officials believe that sending boats back to Libyan ports will have a powerful deterrent effect on would-be migrants considering paying traffickers for passage to Europe.

But that approach has been criticised by international rights groups who say people returned to troubled Libya face detention in squalid camps and abuse at the hands of traffickers.

“After years of saving lives at sea, Italy is preparing to help Libyan forces who are known to detain people in conditions that expose them to a real risk of torture, sexual violence, and forced labour,” said Human Rights Watch's Judith Sunderland.

As parliament voted, Italian police on the island of Lampedusa “preventatively” impounded the Iuventa, a boat operated by German NGO Jugend Rettet, on the orders of a prosecutor based in Trapani, Sicily.

Prosecutor Ambrogio Cartosio said “people on the Iuventa are believed to have taken on board, on at least two separate occasions, migrants escorted by Libyan traffickers whose lives were not in danger”.

He said the probe, which began in 2016, had uncovered other elements “which lead us to believe that the practice is frequent”, but the idea there was a “coordinated plan” between the Iuventus and traffickers was “pure science fiction”.

Cartosio said he thought those involved had been driven purely by “humanitarian motives. There is nothing to suggest the aim is financial gain”.

Investigators have yet to single out suspects, saying that at the moment the probe is into “persons unknown”.

The move to impound the Iuventa came as Italy began enforcing a controversial code of conduct for charity boats rescuing migrants in the Mediterranean.

Jugend Rettet was among six of nine NGOs operating search-and-rescue activities in waters off Libya to reject the new rules, but Cartosio said there was no link between the investigation and the refusal to sign the code.

Italian authorities say the rules are necessary to ensure the boats are not effectively encouraging migrants to embark on the perilous crossing.

The NGOs have particularly objected to a requirement to allow an Italia police official to travel on each boat and a ban on moving rescued migrants from one aid vessel to another while still at sea, which they say could result in avoidable deaths.