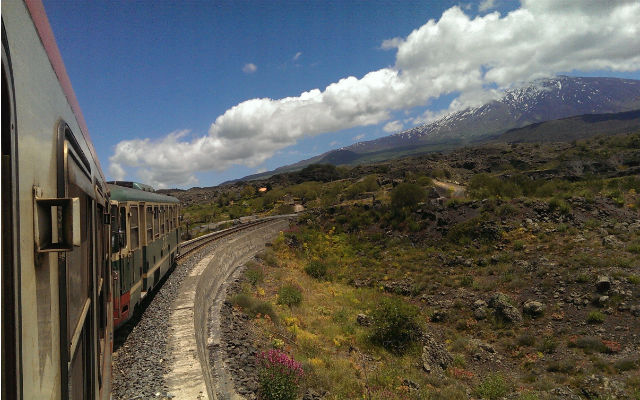 Some climb through snow-capped fields in winter to reach peaks of more than 1,400 metres. Others slither their way round lakes, forests and volcanoes, cutting through swathes of majestic countryside from north to south.

A few are powered by steam, others by diesel or electricity: away from the hustle and bustle of busy highways and thoroughfares, Italy's quaint and quiet tourist railways are a great way to see some of the country's natural highlights.

More than 100,000 tourists used train services in Italy in 2016, Silvio Cinquini, a spokesman for The Association of Tourist Railways, told The Local Italy.

“Tourist railways began in 1994 when a few public service lines were closed down,” says Cinquini, whose organization administers three of the railways featured in this article.

There are 10 tourism-only railways in all, says Cinquini. All are a recent phenomenon. “Italy realized later than other nations how a railway can have a value as a tourism asset in a local economy,” says the rail enthusiast.

Below are a few of the most breathtaking railways, both tourist and public, across the Italian peninsula, as well as in Sicily and Sardinia. Follow in the footsteps of figures such as Sophia Loren, Federico Fellini, Vittorio De Sica – as well as various Italian presidents and popes – and travel the slow way.

Traversing snow-capped fields in winter, the so-called 'Italian Trans-Siberian' covers a stretch of nearly 130 kilometres near the Adriatic coast. The sleek wooden interiors and decor lamps inside the 1930s diesel-powered vintage carriages make this stretch of tourist railway a favourite among train enthusiasts and nature lovers. The Circumetnea is not strictly-speaking a tourist railway but it does invite visitors to cross its mystical landscape. The train departs Riposto, just south of Taormina, and winds its way slowly towards the lava rocks of Mt Etna, leaving the ocean behind.

The active volcano still erupts smoke and lava, yet it is the breathtaking views from both sides of the train that fire the imagination.

Cutting through the Sila National Park in Calabria, the Sila railway ascends to a height of 1400 metres. It also passes the highest narrow-gauge railways station in Europe at 950 metres. The renovated classic trains are powered by steam and the decor and attention to detail replicate the vintage experience.

Next departure: Every day (weekdays)

Sardinia's 'Green Train' delves into the island's interior from the coast at several points, running for a total of 453 kilometres across the island on six stretches of line.

The Sassari (Tempio) to Palau section of railway cuts coast-to-coast across the north. An extra one-coach service links Sassari to Alghero on the west, allowing visitors to traverse the whole of the north east-to-west.  The train trickles along ancient aqueducts and bridges taking in various stunning landscapes along the way.

British writer DH Lawrence apparently travelled across Sardinia on the Treno Verde. A train and carriage can be rented for a private trip for €1470, according to the route's website.

Reopened in 1994 after 30 years closed, the Ferrovia del Basso Sebino runs from the banks of the River Oglio and cuts around Lake Iseo (Lago d'iseo). The Festival of Villages of Lake Iseo presents a series of celebrations on September 10 and should be a great time to travel this route via castles and forests at the foot of the alps.

Steam-hauled trains with vintage coaches and capacity for up to 390 passengers can also be reserved on this line. This quaint yet spectacular Tuscan railway line coasts along viaducts, beside creeks and through lush landscape, via Mt Oliveto, taking in famous wine valleys, including Montalcino, around Siena. The line stops at several 19th century stations, before meandering along the banks of the river towards Grosseto. There are several departures out of Siena in September, all set to coincide with local events and festivals. This short stretch of railway takes travelers from the city of Agrigento, home of Nobel Prize-winner Pirandello, to Porto Empedocle, home to the white cliffs knows as the 'Turkish Steps'. The train stops at the station Tempio di Vulcano, within the Valley of Temples, where seven ancient places of worship to Greek gods stand tall and intact.

The Petrarsa Express departs from Naples and brings passengers directly into the National Railway Museum in Petrarsa on a vintage carriage. The museum is situated on the sight of one of the first ever tracts of Italian railway, squeezed between the ocean and Mt Vesuvius. Besides hosting concerts and events, the museum traces 150 years of Italian railway history. Like its nearby baby cousin – the Ferrovia del Basso Sebino – the Camuna railway bends round Lago d'Isea and the River Oglio, albeit for much longer. The entire route is part of a UNESCO World Heritage-listed and protected site.