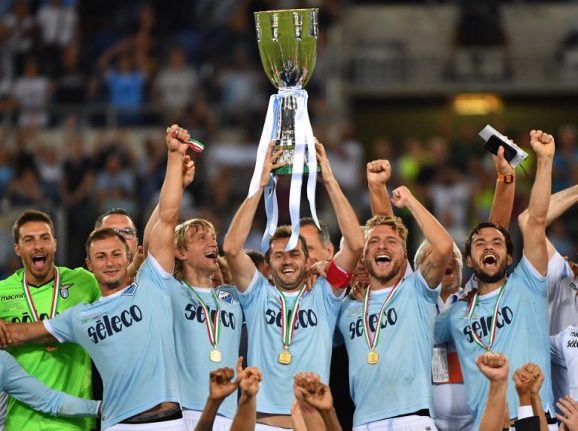 Ciro Immobile gave Lazio a 2-0 lead with a 31st-minute penalty and 52nd-minute header before Juventus forward Paulo Dybala pulled the Serie A champions and Italian Cup winners level thanks to a free-kick after 85 minutes and a last-minute penalty.

But Lazio had the last laugh when Murgia turned in a cross from fellow substitute Jordan Lukaku, the brother of Manchester United star Romelu, in the third minute of stoppage time.

Juventus, the Champions League runners-up, were on the front foot at the start at the Olympic Stadium and could have been ahead inside the first five minutes.

Alex Sandro caught the Lazio defence napping with a break down the left wing but Juan Cuadrado's close-range snapshot was smartly turned away by Lazio goalkeeper Thomas Strakosha.

The Albanian international goalkeeper had to be alert again just moments later to save from Argentina striker Gonzalo Higuain.

However, Lazio, defeated 2-0 by Juventus in the Coppa Italia final at the end of last season, quickly settled and deservedly grabbed the lead on the half-hour mark.

Veteran goalkeeper Gianluigi Buffon was slow off his line to meet the onward rushing Immobile who was brought down inside the area as he attempted to dribble the ball past the 39-year-old.

Buffon was yellow-carded for the foul before Immobile, a former Juve youth player, buried the penalty kick to the left of the 'keeper.

Buffon made amends moments later when he pulled off a fine double save to deny Dusan Basta and former Liverpool star Lucas Leiva.

Seven minutes into the second half, Immobile made it 2-0 with a fine header past Buffon. Higuain, dropped by Argentina last week, then poked a chance wide of the Lazio goal in a rare moment of danger before Buffon was called into action again to keep out a stinging drive from Luis Alberto.

However, Dybala, handed the iconic number 10 shirt made famous by the likes of Zinedine Zidane, Andrea Pirlo, Alessandro Del Piero and Roberto Baggio, suddenly showed his worth to Juventus.

First, he bent in a free-kick with his left foot around the Lazio wall in the 85th minute to reduce the arrears.

Then the Argentine star held his nerve to convert a last-minute penalty, again with his left foot, after Alex Sandro had been brought down in the area.

But Lazio were not to be denied with the powerful Lukaku storming away from the ageing Juve defence down the left before pulling the ball back for Murgia to slot in the winner.