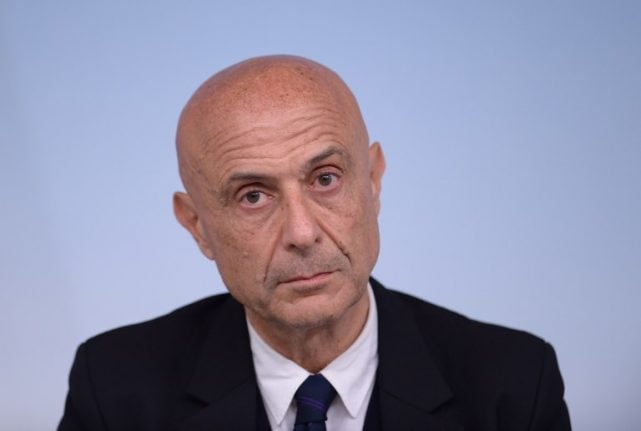 “We are still in the tunnel and it is long, but for the first time I'm starting to see light at the end of it,” the 61-year old told journalists this week at an interior ministry briefing.

Bald and often severe-looking, Minniti listed his ministry's achievements in everything from fights against the mafia and terrorism to combating violence against woman.

But it is a recent sharp drop in migrant arrivals that has really boosted the veteran fixer's profile, even if it remains unclear how much credit he can take for it.

According to the latest polls, this expert in backdoor diplomacy has been named Italy's most popular politician.

It is an accolade that has prompted suggestions that Minniti — with his leftist background but firm stance on migration — is perfectly placed to stand as a candidate for prime minister in elections next year.

But the former philosophy student, who has served in five centre-left Italian governments, has shrugged off the idea.

He has enough on his plate with tackling the biggest migrant flux in Europe since the aftermath of World War II. Some 600,000 people have been rescued from boats and brought to Italy since 2014 and 14,000 have died trying to make
the same crossing.

Minniti's action plan has been multi-pronged, starting with a threat that unless other European countries do more to help Italy, Rome could issue newly-arrived migrants with visas allowing them to leave the country and head
north.

The man who cut his teeth on intelligence operations and crime-busting in a part of the country ruled by the ruthless 'Ndrangheta mafia was also quick to lay down the law to privately-funded rescue boats saving migrants at sea.

The code of conduct he forced them to sign was criticised by many humanitarian agencies as hampering life-saving work. Famed anti-mafia journalist Roberto Saviano was among those who denounced
Minniti personally over the code.

The minister was unfazed. Faced with reluctance among some members of the cabinet as well, he threatened to resign if they did not back him, and his polling numbers won the day, according to Italian media reports.

Drawing on contacts in Libya made during his years in intelligence — he made his first visit to the ex-Italian colony at the end of the 1990s — Minniti persuaded tribes in the crisis-hit country's south to crack down on people smugglers.

As political analysts have noted, the minister has no qualms about doing the foreign affairs minister's job for him.

Minniti has been pushing hard for the Libyan coast guards to up their interception of migrants at sea — a move heavily criticised by rights groups.

And it was he, according to press reports, who urged the UN-backed government in Tripoli to request Rome's help in tackling human trafficking.

Soon enough the number of arrivals began to drop off: this year Italy has taken in 13,500 new migrants or asylum seekers since July 1, compared with 30,500 last year in the same period.

The UN's refugee agency has warned it is too early to know why the numbers are falling, but in the meantime the political right has lavished praise on Minniti.

His plan to block migrants in Libya echoes a deal between former Italian PM Silvio Berlusconi and Libyan dictator Muammar Gaddafi — an unfavourable comparison leapt upon by critics who point out torture of Africans in the conflict-hit country is rife.

Minniti's strongest opponents hail from the left. But the man who in his youth hung a sign at the headquarters of the Communist Party reading “here we work, we don't do politics” says people must be realistic.

“Fear is a huge theme against which democracies across the world will be measured in the next 15 years,” he said.

And rather than dismissing “fears” created by illegal immigration as groundless or fuel for racism, he insists on “listening to those who are afraid, to help them overcome their fear”.

“Governing migration flows is crucial” for society and democracy, he says. It is a message not dissimilar to that peddled by the populist Five Star Movement, currently neck-and-neck with Minniti's Democratic Party (PD) in the polls.