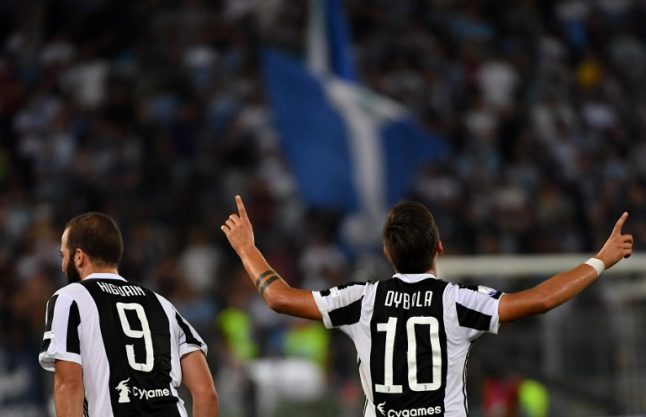 Juventus, beaten Champions League finalists twice in the past three seasons, begin the 2017-2018 season looking to extend their current record of six consecutive title wins in Italy's Serie A.

The Local looks at the teams looking to stop Massimiliano Allegri's men from securing a seventh consecutive league crown.

An impressive summer spending spree, which included long-time Juventus defender Leonardo Bonucci, has boosted hopes at the seven-time European champions who are now owned by a Chinese consortium. Coach Vincenzo Montella has also signed Portugal starlet Andre Silva (Porto), is reportedly on the verge of capturing Fiorentina's Croatian ace Nikola Kalinic and will recoup M'Baye Niang after his loan spell at Watford ended.

The capture of Argentinian Lucas Biglia from Lazio will add muscle to a Milan midfield that is set to feature the attacking talents of Hakan Calhanoglu, recently arrived from Bayer Leverkusen, Suso, Giacomo Bonaventura and powerful Ivorian forward Franck Kessie, formerly of Atalanta. Bonucci, the winner of six consecutive titles in a seven-year spell with Juventus, will marshall a new-look defence alongside Alessio Romagnoli with Luca Antonelli or Ricardo Rodriguez, recently arrived from Wolfsburg, at left-back, and Andrea Conti set to push Ignazio Abate for his place at right-back. Goalkeeper Gianluigi Donnarumma decided to remain at the club after signing a new improved deal.

Bold predictions last season unravelled even before Frank De Boer was sacked after 85 days and replaced by Stefano Pioli before he, in turn, was shown the door amid a late-season downward spiral that saw Inter slide from Champions League contention to seventh place. Former Roma supremo Luciano Spalletti is now at the helm. Inter's acquisition of Slovakian central defender Milan Skriniar from Sampdoria, Fiorentina midfielders Matias Vecino and Borja Valero and Brazilian left-back Dalbert (Nice) adds weight to a squad that, on occasion last season, showed glimpses of title-winning ability.

Those hopes will be tempered if creative midfielder Ivan Perisic, linked with a move to the Premier League, is sold. A pre-season that brought seven wins and a draw, including friendly victories over Lyon, Chelsea and Bayern Munich suggests Spalletti's Inter can go far.

Still searching to emulate the heady days of 1987 and 1990 when Diego Maradona led the club to title glory, Napoli made up for losing Polish striker Arkadiusz Milik early last season to produce arguably the best football in Italy, thanks largely to the goalscoring talents of midfielder-turned-striker Dries Mertens. But, unlike Juventus, Napoli's squad is spread thin when it comes to competing on all fronts, a handicap that has seen them come close, but not close enough, in the past three campaigns.

If Napoli get past Nice to qualify for the Champions League group stages (they lead 2-0 after the play-off first leg), coach Maurizio Sarri could be pushed to ask club owner Aurelio De Laurentiis for fresh recruits following a comparatively quiet transfer period that notably saw centre-back Nikola Maksimovic sign from Torino and midfielder Marko Rog join from Dinamo Zagreb.

A thrilling end to last season saw Roma creep close to handing club legend Francesco Totti a title-winning send-off. But that optimism has, in the space of a few summer weeks, been replaced by a feeling of doubt over what's now in store. Without Totti for the first time since 1993, Roma head into the unknown under Eusebio Di Francesco after he was appointed to replace Spalletti.

Di Francesco cut his Serie A teeth over three, rollercoaster seasons with mid-table Sassuolo, but is already sowing doubt among Roma's long-suffering fans after a pre-season spell which saw a 4-1 defeat to Celta Vigo. Dutch right-back Rick Karsdorp is Roma's biggest summer signing, from Feyenoord for 14m euros, although the 22-year-old is facing more knee trouble. A positive start to the season will be key for Di Francesco, a former Roma midfielder who won the club's last title, in 2001.