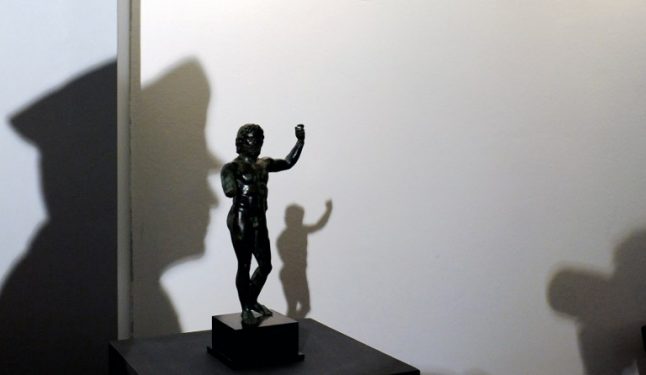 A bronze statue of Zeus recovered by Italy's cultural heritage squad in 2010. Photo (not related to story): Tiziana Fabi/AFP.

Italian police have recovered more than 100 works of religious art following investigations into 24 specific cases of theft from churches and religious institutions in central and southern Italy. The artwork retrieved has an estimated value of more than €7 million.

The recovered items follow a joint investigation by police forces in Isernia, in the southern Italian province Molise, and Velletri, a municipality in the neighbouring province of Lazio, near Rome, together with Italy's protection of cultural heritage squad.

Among the pieces of art recovered as part of Operation Start Up is Station XII of Via Crucis: Jesus dies on the cross, dated 1520 and removed on July 2, 1980, from the Sainte Waudru religious institute in Mons (Belgium), according to branch of the Italian police that investigates crimes related to cultural heritage.

At least 20 suspects in the cases have been charged with aggravated theft.

“The investigation was born following careful analysis of the thefts of ecclesiastical cultural assets which were located near Caserta, but also in the province of Isernia, committed in places of worship and religious institutes,” says the statement.

Last year a statue of the Archangel Michael dating to 1330 was stolen from The Church of San Michele in Molise, reports Il Quotidiano Molise, a local newspaper.

A statue was stolen two days ago from a church in Acerno, a town approximately 100 kilometres south of Naples, according to Il Mattino.

In 2015 alone, Italian police registered 474 of thefts of “art and architectural material,” according to data from Italy's national statistics agency ISTAT.

Vincent Van Gogh's Congregation Leaving the Reformed Church in Nuenen and The Beach At Scheveningen During A Storm were recovered at the home of a drug baron in Naples in September 2016. The paintings were stolen in 2002.