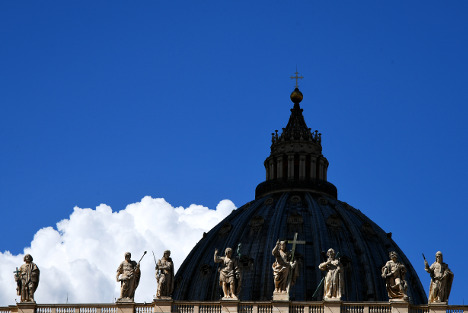 In the latest scandal to embroil the centuries-old institution, Libero Milone had accused the Vatican of getting rid of him because his investigations into possible illegal activity had hit too close to home.

Just hours after the story broke, the Vatican issued a furious response.

“Milone's office illegally appointed an external company to carry out investigations into the private lives of members of the Holy See,” it said in a statement.

It is very rare for the secretive seat of the Roman Catholic Church to comment in public about internal affairs.

Milone had given an interview published earlier Sunday to four media outlets including Italy's Corriere della Sera daily in which he said: “I did not voluntarily resign. I was threatened with arrest”.

The auditing wizard, who spent much of his career with the audit firm Deloitte & Touche and was hired to much fanfare in 2015, said high-ranking figures in the Vatican wanted to scupper Pope Francis's financial reform efforts.

“I feel very sorry for the pope. I had a splendid, indescribable relationship with him, but over the last 18 months they stopped me seeing him. Obviously they didn't want me telling him about some of the things I'd seen,” he said.

While he said a non-disclosure agreement prevented him from giving details of the irregularities he uncovered, his troubles began when he hired an outside firm to check whether the computers of his team had been bugged.

That was the company the Vatican believes was spying for Milone.

“They accused me of having improperly looked for information on Vatican members. I found out they had been investigating me for seven months,” he added.

When he was hired, Vatican officials said Milone would be “completely independent” and would have the power to look through the books of every department in the tiny city state, reporting only to the pope.

But the Vatican said Sunday that not only had Milone broken an agreement for both parties to remain quiet about his dismissal, he had been acting like a secret agent in the tiny city state.

“The job of the auditor general is to analyse the balance sheets and accounts of the Holy See and connected bodies.

“It turns out unfortunately that the office led by Milone, going outside its jurisdiction, illegally appointed an external company to carry out investigations into the private lives of members of the Holy See.

“As well as being a crime, this irreparably damaged the trust placed in Milone who, when confronted with his responsibilities, accepted freely to hand in his resignation,” it said.

Pope Francis was elected in 2013 on a mandate to clean up the Vatican, including its financial house.

But it has struggled to shake off the whiff of scandal.

The Vatican's bank, known as the Institute of Religious Works (IOR), became notorious after the 1982 death of Italian banker Roberto Calvi, whose corpse was discovered hanging from Blackfriars Bridge in London.

Prosecutors believe it was a mafia killing linked to money laundering via the Vatican bank.