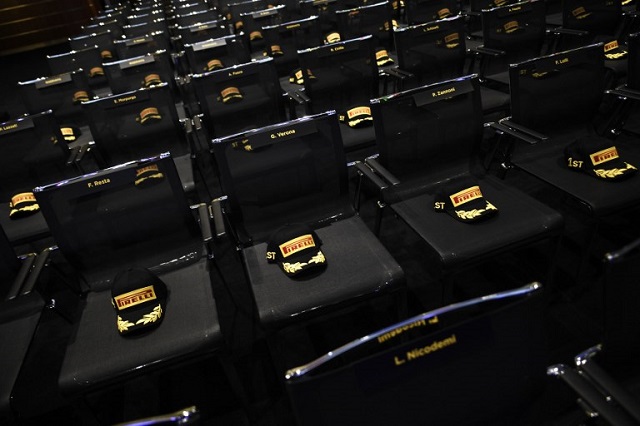 Pirelli's caps on chairs before a ceremony to mark the comeback of the Italian tyremaker. Photo: Marco Bertorello/AFP

In morning business on the Milan stock exchange, Pirelli stock fell by more than two percent from its 6.50-euro offer price which had valued the firm at a total 6.5 billion euros ($7.7 billion), wiping tens of millions of euros off its worth.

Some 35 percent of Pirelli's capital went on sale, with the flotation already priced at the lower end of an initial range pitched to investors amid tepid demand.

But even so, many initial buyers got out of the stock quickly on Wednesday.

An early stock market performance of new shares gives important clues about the capacity of a company to raise funds again further down the road, and also about the ability of stock markets to absorb a large new issue.

But Pirelli's chief executive Marco Tronchetti Provera said he was untroubled, saying there was “always volatility” in the first few days and that investors should wait some months before judging the offer's success.

The stock slide punctured the success of the return to equity markets of Pirelli, an icon of Italian industry famous for providing Formula One racing tyres. It withdrew from the stock exchange two years ago after it was taken over by China National Chemical Corp (ChemChina).

Under terms of the deal with the Chinese giant, Pirelli was to return to the stock market by 2019 at the latest after a split between the company's consumer and industrial activities.

The Milan listing concerns only the consumer side, “a 145-year-old start-up,” as chief executive Marco Tronchetti Provera has described the reshaped business.

The company, which had sales of 4.97 billion euros in 2016, pitched its shares on the back of a forecast of growth of at least nine percent a year through 2020, at which point the CEO expects to step down.

The IPO reduces ChemChina's stake, held through the Marco Polo holding company, to below 50 percent.

Tronchetti Provera backed the 2015 deal with ChemChina as the best way to prevent Pirelli becoming a target for hostile takeover attempts.