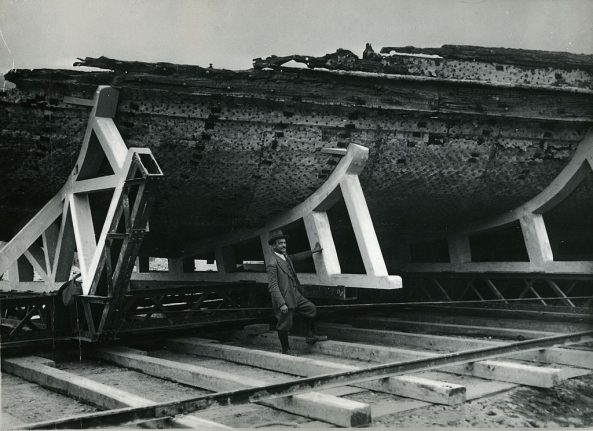 A mosaic from one of Emperor Caligula’s ships will return to Italy after it was rediscovered in an art collector’s New York apartment, where it was being used as a coffee table.

Italy’s “Art Squad” – a special unit of the military police charged with protecting the country’s cultural heritage – traced the long-lost mosaic to an Italian collector living on Park Avenue, US and Italian authorities announced on Friday.

The same investigation also tracked down vases, coins, bronzes and other antiquities that had been taken to the US illegally. A section of mosaic floor excavated from the ships of Nemi. Photo via the Manhattan District Attorney's Office.

The 2,000-year-old mosaic has not been seen publicly since the 1940s, when it was removed from the Naval Museum at Lake Nemi, south-east of Rome.

Made of green and red porphyry, serpentine and glass, it once decorated the marble floor of one of the extravagant ships that pleasure-loving Emperor Caligula built to sail on Lake Nemi during his reign in the 1st century AD.

They sank after Caligula’s fall and remained underwater until the early 1930s, when dictator Benito Mussolini ordered engineers to drain Lake Nemi and recover the ships. A bronze from one of the Nemi ships at Rome's Palazzo Massimo alle Terme. Photo: Miguel Hermoso Cuesta/Wikimedia Commons.

Two boats were retrieved and put on display in a purpose-built museum. But during World War Two, amid fighting between German and American forces in May 1944, the museum burned down.

The ships were destroyed but investigators now believe that some artefacts, including the mosaic fragments, had already been looted. It may be thanks to the theft that they survived.

It’s not clear how the mosaic made its way to the US. According to The Telegraph, by the 1960s it was in the possession of an Italian antiques dealer in New York, who said she bought it from an aristocratic family and was unaware of its origins. She and her husband reportedly used it as a coffee table for decades.

The mosaic will now be returned to the museum in Nemi, which was rebuilt after the war and today houses models of the lost ships.

Also returning to Italy are a wine vessel discovered in the collection of New York’s Metropolitan Museum of Art and a fish plate that turned up at a Christie’s auction, both from the 4th century BC.

Once the American “owners” of the artefacts learned that they were stolen, they returned them willingly, according to the Manhattan District Attorney’s Office.