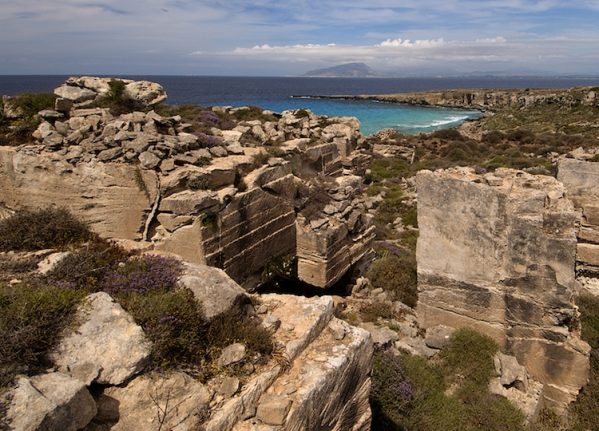 Favignana is famous for its stone cliffs. Photo: Roberto/Flickr.

The inmates had been on the loose since Saturday, when they escaped from a maximum security prison on Favignana, a small island to the east of Sicily.

The three men, one of whom was serving a life sentence for murder, were spotted on one of the island’s beaches in the early hours of Thursday morning, apparently trying to steal a boat.

Officers captured two of the men immediately but one managed to swim inland via a river, according to Ansa news agency. Police were able to track him by his wet footprints and he was subsequently stopped and returned to the prison along with his two companions.

The men escaped by sawing through their cell bars and using bedsheets tied together to lower themselves down the walls.

Italy’s national prison authority has opened an investigation into the escape, which according to La Republicca surveillance cameras failed to pick up.

Italian prison workers have long complained that staff shortages and lack of maintenance make escaping far too easy. In recent years several inmates have used knotted bedsheets to flee from other prisons in Sicily, Rome and Florence.

The prison is located in the centre of Favignana island, which attracts a growing number of tourists thanks to its idyllic beaches and tuna fishing industry. It houses a number of violent criminals, including the infamous mobster Renato Vallanzasca.

The three escapees were Adriano Avolese, serving life for murder, Giuseppe Scardino, sentenced to 15 years for robberies and the attempted murder of a police officer, and his accomplice Massimo Mangione, serving 12 years for the same crimes.