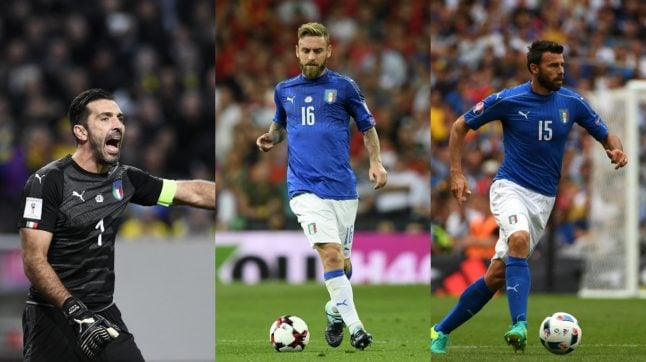 Italy's old guard face a final stand in Monday's World Cup play-off against Sweden in the San Siro after Gian Piero Ventura's side lost the away leg 1-0. The Italy and Juventus captain is targeting a record sixth World Cup appearance in Russia. He made his international debut as a 19-year-old in October 1997 in the snow of another World Cup play-off against Russia, coming on for the injured Gianluigi Pagliuca, and immediately saved heroically from Dmitri Alenichev and ensured Italy qualified for the following year's World Cup.

Buffon, whose mother was a discus thrower and father a weightlifter, made his Serie A debut with Parma, winning the Italian Cup, the Italian Super Cup and the UEFA Cup before joining Juventus in 2001 and going on to become a club legend with eight Serie A titles with the Turin giants.

At age 39, his statistics are staggering. With a remarkable 627 Italian top-flight appearances he will also will earn his 175th cap against Sweden on Monday. That is 39 more than another 2006 World Cup winner, Fabio Cannavaro, and 63 more than the legendary Dino Zoff. “I don't want to think it's the game of life, but I'm convinced that with the help of the public we will do it,” he insists. Defensive midfielder De Rossi is going for a fourth World Cup. The 34-year-old has spent his entire senior career with hometown club Roma, whom he joined in 2000, rejecting big money moves away. He scored on his international debut in 2004 in a World Cup qualifying match against Norway and wore Italy's captain's armband for the first time in a 0-0 friendly draw against Iceland in March 2005.

De Rossi overtook the recently-retired Andrea Pirlo in the all-time appearances list when he earned his 117th cap in the first leg of the play-off in the Swedish capital, but Buffon's haul is well out of reach.

“It would be great to be able to play at my fourth World Cup. It's a tournament that no one wants to miss,” said De Rossi. “The stakes are so high that the idea of shedding blood and sweat is appropriate. We must give everything right to the finish.” Barzagli has won the World Cup, Bundesliga and six Scudettos, but despite being one of the most decorated defenders of his generation, the 36-year-old often goes under the radar. Barzagli started his career as a midfielder, but was advised by Juventus coach Massimiliano Allegri to switch to defence when the pair played together for Pistoiese in the Italian second division.

“I said that if he wanted a different kind of career, he needed to change — he needed to drop back 15 metres,” said Allegri.

Barzagli went on to star for Ascoli, Chievo, Palermo and Wolfsburg before joining Juventus in 2011.

“Andrea is our professor. He's always in the right place at the right time,” says Juventus teammate Giorgio Chiellini. He won his first senior cap in November 2004, in a 1-0 friendly win against Finland under Marcello Lippi. Capped 73 times, it would be his third World Cup after being overlooked by Lippi in 2010.