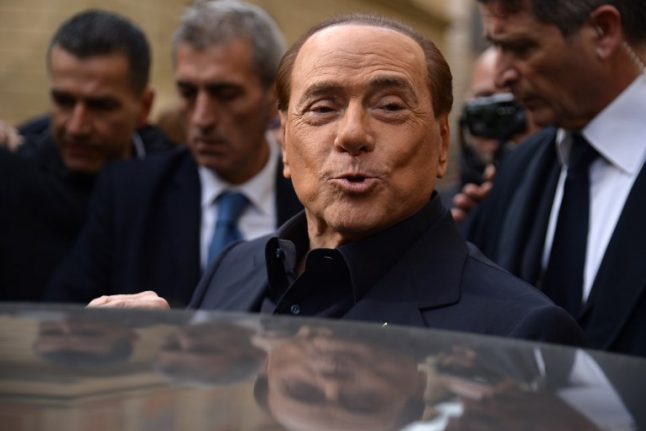 Italy's four-time prime minister, 81, is hoping the European Court of Human Rights will lift a public office ban he was slapped with following a conviction for tax fraud, freeing him to run in the general elections in spring.

The court meets to discuss his case on Wednesday, though its ruling may not come before the vote early next year.

“I will be on the pitch, as captain or coach,” he said last week, using the sort of popular football jargon that won him so many fans during his “self-made man” rise to power in 1994.

Even if Berlusconi – “The Immortal”, as he is dubbed by political ally Roberto Maroni – cannot run, he aspires to play kingmaker for the right, boosted by a recent win in Sicily and hungry for a return to national power. The man famed for his “Bunga Bunga” sex parties and serial off-colour gaffes has been written off as a political force time and again, the death knell sounding particularly loudly after a series of scandals and open heart surgery last year.

And yet once again, at the helm of his centre-right Forza Italia party, he is one of the key figures going into the election, which is expected to take place before May.

“There is a part of the Italian electorate that likes Berlusconi, and they represent seven to eight percent of the vote”, political scientist Giovanni Orsina told the foreign press in Italy recently.

“And then there are moderate voters, who do not want to vote for the [anti-immigrant] Northern League, the radical left or the [anti-establishment] Five Star Movement. So who does that leave? Berlusconi or Renzi,” he said.

But former centre-left prime minister Matteo Renzi, who was forced to step down after losing a constitutional reform last year, has lost popularity and is accused of adopting a divisive stance which has split the left. A Five Star supporter holds a poster reading “Renzusconi, all go home” and showing a mash-up of Renzi and Berlusconi. Photo: Alberto Pizzoli/AFP

Political unity is no picnic for Berlusconi on the right either, with the League campaigning on an anti-euro front and its leader Matteo Salvini, 44, pushing hard to be the man to lead up their coalition come ballot box time.

There is a lot at stake: while the ruling centre-left Democratic Party (PD) and the Five Star Movement (M5S) are pretty much head-to-head in the latest polls, a united right is expected to beat them with 35 percent on voter intentions.

While it might win, it would not necessarily take home enough to govern – for that it would need to take over 40 percent. But it's not a challenge to spook eternal optimist Berlusconi, who has rebranded himself as a wise moderate.

Not only are his political fortunes looking rosy, but a court ruled last week that his ex-wife Veronica Lario does not deserve her €1.4 million-a-month alimony, and will have to pay him back some €60 million.

Everything that has been thrown at him – community service in an old people's home, the loss of his football club AC Milan to a Chinese buyer, attacks on his Mediaset media empire – appears to have simply bounced off.

“He incarnates, as ever, both the system and 'anti-system', the moderate and extremist wings, and manages to hold it all together,” said Marco Damilano, the editor-in-chief of the l'Espresso magazine.

And does so “in a strange electoral campaign, where the competitors will compete not defeat him, but imitate him”.