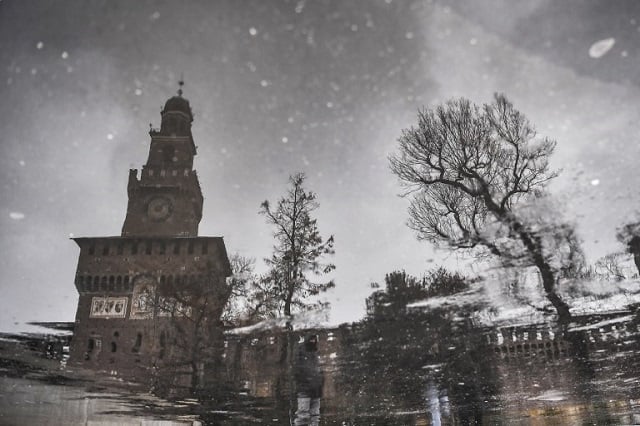 The northeastern regions of Liguria, Tuscany, and Emilia Romagna were still on red alert for the bad weather, with several rivers being closely watched over fears of flooding.

In Lucca, Tuscany, the Serchio river burst its banks on Monday afternoon, with workers and volunteers from the Civil Protection Agency on hand to monitor the situation.

And Lentigione in Emilia Romagna, a town of 1,000 inhabitants, was evacuated when the Enza river also flooded nearby, with some of the evacuations carried out by helicopter, Ansa reported. The town's central square is pictured below.

IN PICTURES: Weather warnings as snow and ice blanket Italy

In Turin, where temperatures remained below zero, flights leaving from the Turin-Caselle Airport were hit by delays, with local senator Stefano Esposito writing on Twitter that it was “shameful” that the airport only had one tool for de-icing the aircrafts' wings. Elsewhere in Piedmont, ice on the roads following Monday's snowfall caused considerable disruption to traffic.

Strong winds have also been battering the north, causing damage to some buildings including a hospital in Bologna, and causing several trees to fall in roads. Wind speeds reached 100 kilometres per hour in Le Marche.

In l'Aquila, one of the few buildings in the centre of the town which had been left standing after the 2009 earthquake collapsed due to the winds, Repubblica reported.

Several roads were closed on Tuesday across the country, and although some rail services were resumed following closure on Monday, railway and road authorities advised those planning to travel to stay updated as the situation was constantly changing.

The situation was slightly better in the south of the country, though connections to the islands were still disrupted by strong winds and seas, including between the ports of Naples, Pozzuoli and Sorrento, those of Ischia, Procida and Capri, and some of the connections around Sicily.

As for how the weather is expected to develop, according to the meteorologists at IlMeteo, Tuscany, Lazio, and Umbria will bear the brunt of the bad weather over the next few days, with particularly intense rainfall across Lazio. The northern regions will see an improvement but lots of cloud cover, with plenty of snowfall in the mountainous regions, while the south will also experience rainfall and colder than average temperatures.