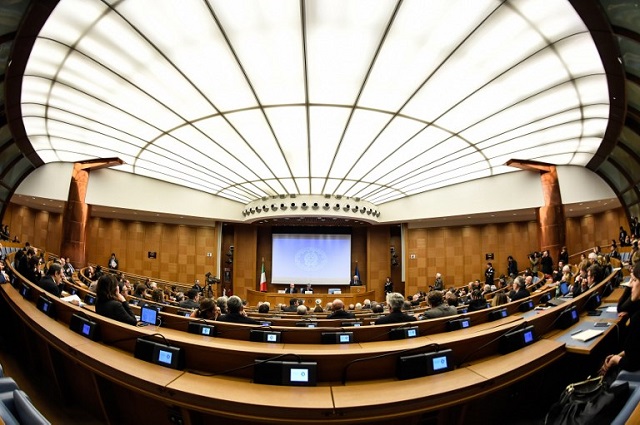 When the current prime minister, Paolo Gentiloni, was appointed in December 2016, he was the fifth new PM in as many years, and the fourth unelected prime minister in a row.

No single party – and not even a coalition – has been able to gain enough seats to govern over the past five years. This has led to so-called 'grand coalitions', meaning that parties from across the political spectrum join together to form a government after the vote. Unsurprisingly, because of the often very different views these parties hold, that makes for a rocky environment in which to introduce any kind of new law or innovation, and these governments have a stronger likelihood of collapsing.

This year's general election is scheduled for March 4th, but shows no signs of bringing an end to this instability.

Votes will be cast using a new, never tested electoral law. It was a necessity after Italy was left with two different electoral systems for its houses of parliament in December 2016. Former PM Matteo Renzi had reformed the way the lower house was elected, but his attempts to do the same in the Senate failed, creating an inconsistent electoral system.

Over the next few months, Italy's parties grappled with the task of putting together a new law. The result is ‘Rosatellum’, a name it gets from Ettore Rosato, who leads the Democratic Party in the Lower House and drafted an early version of the law, which was passed in a modified version in October 2017.

So, how does it actually work, and what does it mean for Italy's political future? The first thing to know is that Italy's parliament is made up of two houses or chambers: the Chamber of Deputies (or Lower House) with 630 members, and the Senate (Upper House) with 315 members. For any law to get passed in Italy, it needs approval from both these chambers. The Chamber of Deputies or Lower House. Photo: Andreas Solaro/AFP

In order to gain the seats awarded through proportional representation, parties must get a minimum of three percent of the vote in both houses; for coalitions, that figure rises to ten percent.

As for how the changes to the law could affect the eventual outcome, one big change is that the three-percent threshold and first-past-the-post system provide an incentive for coalitions. In order to win the first-past-the-post seats, parties with similar outlooks will be rewarded by grouping together rather than splitting the possible vote.

The idea behind this is that it will make Italy more governable by encouraging coalitions rather than lots of small parties, but the M5S argued that it penalizes them (the party labels itself as anti-establishment and refuses to enter into coalitions). It's particularly good news for Forza Italia, the Silvio Berlusconi-led party, which has recently won a series of local election victories thanks to its ability to build alliances, but it bodes less well for the left-wing parties, including the governing Democratic Party, as they have seen several splits and disagreements over the past year.

The allocation for first-past-the-post winners in constituencies also benefits parties with a strong regional base. The Democratic Party will be counting on support from the left-wing strongholds of Tuscany, Emilia Romagna and Umbria, while the Northern League will be hoping to scoop up some first-past-the-post votes in the north-eastern regions of Lombardy, Veneto and Piedmont.

The eventual result is anyone's guess at the moment — this is unchartered territory. Current polling suggests that there won't be a clear winner, which will mean the parties will be forced to result to bargaining after the vote. While the centre-right coalition appears to be doing well, a hung parliament is probably the likeliest result, which could lead to a grand coalition, or, less probably, the result that nobody wants: new elections.