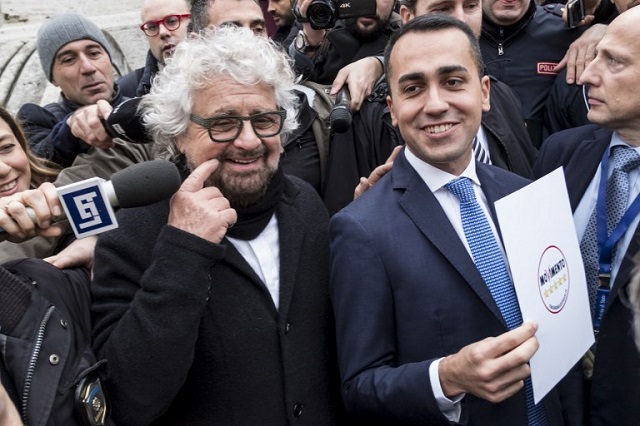 Grillo started the Five Star Movement in 2009 with web strategist Gianroberto Casaleggio, using the blog and networking site Meetup to gather support and bring people together.

It quickly grew into a formidable force, capitalizing on widespread distrust of the political mainstream to get the second most votes of any party in the 2013 election.

Now with another election on the horizon, set for March 4th, the divorce of the party from the blog that spawned it is a sign that the M5S is keen to take a new direction.

Luigi Di Maio, elected in September as the party's new leader, said on Tuesday that while Grillo founded the M5S, it was now “moving forward on its own two legs and getting stronger.”

Di Maio added that the division did not mean “patricide” or “reneging on the past”, in comments made on late night talk show Porta a Porta.

The top post on Grillo's new blog includes a ten-minute video outlining his vision for the site. “I will go in search of fools, artists, I like to have points of view, but ideas, because I'm fed up with opinions, I'm fed up with opinions,” he wrote, saying that the blog will deal with “future and utopia”. The rest of the site is largely filled with interviews and articles related to technology.

The site's only references to the Five Star Movement are two links to the party's new blog and Rousseau platform, with all other mentions removed.

In recent months, Grillo — currently touring as a comedian — has rarely appeared at party events. Previously he had been the face of the movement, despite a conviction for manslaughter preventing him from running for office.

The move may be a sign of an internal dispute within the M5S about the direction the party should go in, particularly after Di Maio has softened his stance on the euro, relegating the possibility of a referendum on the currency to a “last resort”.

However, it's also possible that this is a deliberate decision aimed at gaining more credibility for the party, which Grillo recently described as having entered its “adult phase”.

“Hitherto it has been an essentially protest movement with Grillo as its figurehead,” James Newell, an Italian politics professor at the UK's Salford University, told The Local.

“Perhaps by formally distancing himself from the Movement, while remaining connected to it in the popular imagination, Grillo is anticipating that the move will enable the M5S to extend its support from pure protest voters to those needing to be persuaded, through its leaders’ profiles, of its potential governing competence,” Newell said.

When Di Maio was elected, much was made of the contrast to his predecessor in looks and rhetoric. Di Maio is young and telegenic, with a background in marketing and a softly-spoken manner far removed from Grillo's showman image and fondness for expletives — early party rallies were known as 'Vaffa-day' or 'Fuck you day'.

Perhaps most significantly, Grillo's new blog shows not only a step back from the party but also a move away from Casaleggio Associati, a technology firm created by the late M5S co-founder Gianroberto Casaleggio and now run by his son Davide. Grillo's blog is now managed by web design company Happy Grafic rather than Casaleggio Associati, which will however continue to manage the movement's blog.

In 2016, a BuzzFeed News investigation uncovered multiple links between the party's leadership and a network of blogs and websites spreading propaganda and fake news.

Though Grillo dismissed the findings as “fake news”, he failed to offer an explanation as to why Grillo's blog, the party's official websites, and other supposedly independent news sites – including TzeTze, a supposedly independent site with over 1.2 million Facebook followers which frequently cites pro-Kremlin site Sputnik – all shared IP addresses, as well as Google Analytics and AdSense IDs, as reported by BuzzFeed News.

On Tuesday, Alberto Nardelli, BuzzFeed's Europe Editor and one of the journalists behind the report, noted on Twitter that: “the company-owned Facebook pages previously used to promote the M5S [including TzeTze] now publish content about food, with previous references wiped out … Other pages appear to have gone all together.”