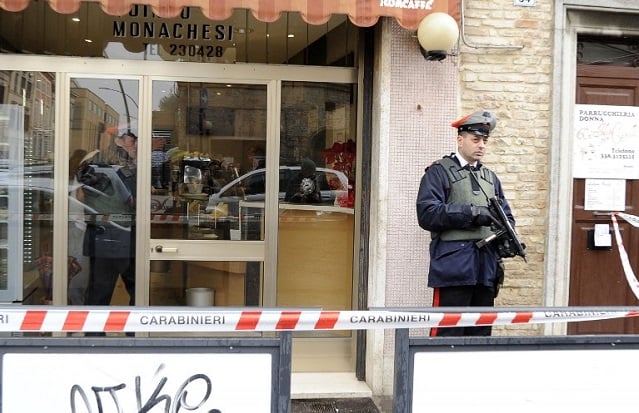 Police stand guard during investigations at one of the sites of the shooting. Photo: Giuseppe Bellini/AFP

The shooting spree has shocked the country, at the front line of unprecedented migration and in the middle of a general election campaign.

Far-right supporter Luca Traini, 28, has been named by authorities as the suspect, accused of opening fire on five men and one woman from Ghana, Mali and Nigeria on Saturday in Macerata, a small town in central Italy.

“I was driving to the gym when I heard on the radio about the 18-year-old girl,” the daily Corriere della Sera quoted Traini as telling investigators.

“Instinctively I turned around, I went home, I opened the safe and took the pistol and decided to kill them all.”

After the shootings, Traini, 28, allegedly got out of his car, made a fascist salute with a tricolour Italian flag draped over his shoulders and shouted “Viva Italia”, or “Long Live Italy”, and “Italy for Italians”, media reports said.

Police who raided his mother's home found far-right literature, including a copy of Adolf Hitler's manifesto “Mein Kampf” and a book by fascist dictator Benito Mussolini.

Interior Minister Marco Minniti said the attack was part of a culture “of right-wing extremism with clear reference to fascism and Nazism” and deplored that the sole link between the victims was “the colour of their skin”.

He said the “criminal act” was prompted by “racial hatred” and had been prepared in advance.

“It's not easy to live in a town where somebody shot six black people. We are all scared,” James Nosakhari, a relative of one of the victims, told AFP.

“You would never believe something like this was possible, this kind of thing happens in big cities,” said Fabrizio Compagnucci, a newspaper seller in Macerata.

Matteo Salvini, head of the far-right anti-immigration Northern League party — an ally of Berlusconi's centre-right Forza Italia — on Saturday condemned the shooting spree but also said the “invasion of migrants” was at the root of a “social clash”.

On Sunday he said Italians were not racist but wanted to “live and work peacefully… in a civil country”.

According to opinion polls, an alliance between Forza Italia, the Northern League and the post-fascist Fratelli d'Italia (Italian Brothers) leads opinion polls with more than 35 percent ahead of next month's elections.

Traini allegedly opened fire in eight areas in Macerata and also targeted the office of the centre-left Democratic Party in a two-hour terror spree in the sleepy town of 43,000 people, press reports said.

One victim was seriously injured in the thorax, the reports said. The other five had lesser injuries.

A Nigerian man who was shot in the thigh while buying cigarettes on the street, telling a television channel from his hospital bed that he was in great pain, adding: “It's very serious.”

Traini, who has a fascist-inspired tattoo is a member of the Northern League and ran in local elections last year. Media reports said police found a gun in his car, a black Alfa Romeo.

“The racist rampage that poisons the elections,” read the headline of one Italian newspaper on Sunday.

The country is a favoured landing point on Europe's southern coastline for migrants making the perilous journey across the Mediterranean, often aboard unseaworthy boats, to enter the continent.

But 2017 was a turning point for Italy: the country went from large-scale arrivals in the first six months to a sharp drop-off, thanks to a controversial agreement between the EU and Libya.

The arrival of 630,000 migrants since 2014 has created fertile ground for anti-establishment and anti-immigration parties.

On Saturday evening Italian Prime Minister Paolo Gentiloni called for calm, insisting “hatred and violence will not divide us”.