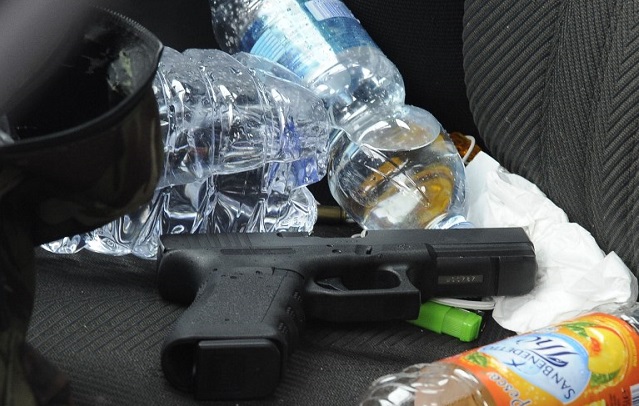 A handgun is pictured in the back seat of the suspect's car. Photo: Giuseppe Bellini/AFP

Suspect Luca Traini, 28, made a fascist salute after the drive-by shooting, which he has said was motivated by the recent murder of a local woman in the Macerata, though he did not know the 18-year-old personally. After hearing on the radio that a Nigerian man had been arrested for the murder, Traini told investigators: “I wanted to avenge [murder victim] Pamela [Mastropietro], and do something about immigration.”

His lawyer, Giancarlo Giulianelli, told Italian media on Monday that he has been given numerous messages of support for Traini.

“Politically, there's a problem. In Macerata, people stop me to give messages of solidarity with Luca,” he said after a meeting with his client. “It's alarming, but it gives us a sense of what is happening.”

Giulianelli went on to say that Traini was “the tip of an iceberg” and that the failure to successfully tackle problems associated with migration was the responsibility of Italy's politicians.

“Politics hasn't given an answer to the problem. The right has exploited it, the left has ignored and underestimated it,” the lawyer told the Ansa news agency.

The victims of the shooting included five men and one woman from Ghana, Mali and Nigeria, though Traini has reportedly said he “did not want” to hit the woman when he opened fire from his car.

Traini has a fascist-inspired tattoo and left a Mussolini votive candle near the spot where Mastopietro's body was found. He is a member of the far-right Northern League, the junior ally in a centre-right coalition that is currently leading opinion polls ahead of a March election. He also ran in local elections last year.

The party's leader, Matteo Salvini, has said he can't remember meeting Traini. He said that “everyone who shoots someone is a criminal”, but added: “The moral responsibility of every incident of violence that happens in Italy is that of those who have filled it with illegal immigrants.”

Coalition ally Silvio Berlusconi, who leads the Forza Italia party, described the shooting as “non-political” and called immigration “a social bomb ready to explode”, before reiterating plans to deport 600,000 migrants from the country.

Matteo Renzi, secretary of the centre-left Democratic Party, appealed for “calm and responsibility” after the shooting.

“It would be easy to keep up the controversy aimed at those who feed hatred every day, but it would be a mistake,” said Renzi.

Five Star Movement leader Luigi Di Maio also urged party leaders “not to campaign on the skin of the murdered girl and those injured [by Traini]”.

READ MORE: 'It could have been me': Shooting highlights racial tension ahead of Italy elections