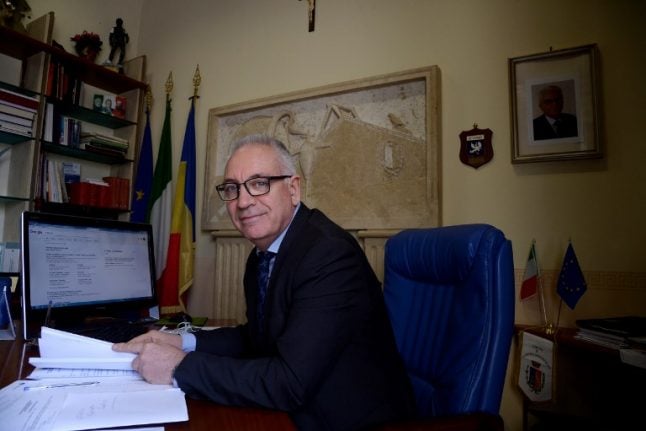 Tall, bespectacled and originally from France, Michel Barbet won the mayoralty last year amid an outpouring of frustration and anger towards mainstream political parties.

Although not up for reelection this time round, the man who locals still refer to as “lo straniero” – the foreigner – is again out campaigning for the anti-establishment movement's causes, notably anti-corruption measures, and this time from a position of power.

“We were elected, almost by default, because of the widespread disillusion,” says Barbet.

The 59-year-old, who made Italy his home four decades ago, won in 2017 partly due to an abstention rate of 50 percent.

“I wouldn't be here if the city had been well run,” he says. The manner of his victory in Guidonia resonates across Italy.

Tired of the scourge of corruption and parliamentary paralysis, voters turned to anti-establishment, Five Star newcomers like Barbet in a last-ditch attempt to bring about positive change in Italian politics.

“When you see what we had before, you think that it can't be worse,” says Rita, a fishmonger in the city's historic quarter, who didn't want to give her last name.

Since their beginnings in 2009, the populists, who support a hotchpotch of policies from across the political spectrum, have surged in popularity.

In the 2013 general election, M5S took 25 percent of the vote and the party has since gained representatives at the helm of around 30 cities across the country, including Rome and Turin.

The party is especially popular among young voters, lured by its rejection of old-style Italian politics and a promise of a universal basic income. “They say that Guidonia is a small Rome, because the same political problems have produced the same effects,” says Barbet, referring to the 2016 election of Rome's first female mayor, Five Star protege Virginia Raggi.

Aged just 37 at the time of her election, Raggi swept to power with 67 percent of the vote following the “Mafia Capitale” scandal, a vast web of corruption and bribery involving almost every department of Rome's city hall. Inexperienced in politics, the former lawyer campaigned on a platform of transparency and integrity.

But as political newcomers, they have been accused of incompetence and political flip-flopping after softening their anti-euro and anti-immigration stance in recent months.

Their squeaky-clean image has also been tarnished by the same kind of cronyism and sleaze allegations that undermined other parties.

“I just hope they're there for us, and even more for our children, rather than their careers,” says Silvia, a 40-year-old mother from Guidonia, home to nearly 90,000 residents, who would not give her last name.

The group is now led by telegenic 31-year-old Luigi Di Maio. He is trying to shift the party away from the rabble-rousing rhetoric of former leader and comedian Beppe Grillo, who has stepped down.

But under the current electoral system which favours coalitions, the party will likely need to make alliances in order to govern. It has previously refused to ally itself with the traditional parties. “Their ideas on how politics should be done are similar to mine,” says 69-year-old Angelo Stazin, a retired air force worker and now a Five Star voter.

He says he switched alliances due to frustration with the ruling centre-left Democratic Party.

As for Barbet, who is currently working on a budget in a city riddled with debt, he knows his party need to convince more voters from mainstream parties to join them.

“It's very slow. It's hard to fight against a mafia culture which is so deeply-rooted in society,” he says.

“It's true that a lot of people no longer believe in politics, but we study, we work, we talk to citizens and we end up getting results.”