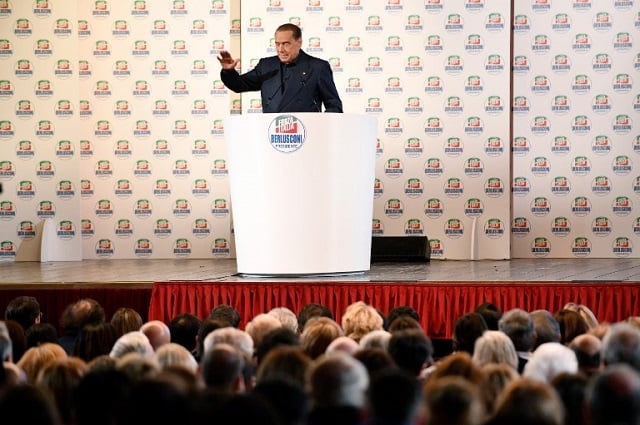 Berlusconi, dressed in black with oiled-back hair and a dayglo smile, spoke for more than two hours at the event in Milan, beguiling the audience just a week before general elections with his trademark mix of populist rhetoric and baudy humour.

“He's an exceptional man,” said Elga Morati, a 70-year-old retired nurse. “He's a real pillar of Italy, someone blessed by the gods.”

Although barred from public office owing to a tax fraud conviction, Berlusconi is hoping to position himself as a key dealmaker in the next government if his coalition wins a majority in parliament on March 4th.

An average of the last major opinion polls suggested Berlusconi's right-wing coalition — which includes his Forza Italia (Go Italy) party, The League and the far-right Brothers of Italy — could finish on top.

While surveys suggest the two-time divorcee derives much of his support from the older generation, there was no shortage of young cheerleaders on Sunday.

“He's young on the inside,” said Giuseppe Porta, a 20-year-old student. “The election campaign proves it: he's constantly on TV or the radio.”

For Simone de Giorgio, also 20, Berlusconi — whose media empire dovetailed with a career in politics and his ownership of footballing giant AC Milan — is a peerless operator.

“Whatever he does, he's always shown he's number one: in business, television, football, politics… he's a phenomenon.”

The former cruise ship singer was Italy's longest-serving post-war prime minister until a blaze of sleaze scandals and fears of a Greek-style financial collapse ended his stint in power in 2011.

Two years later he was forced out of parliament after his conviction for corporate tax fraud was upheld by Italy's highest court and he was sentenced to seven years in jail for paying for sex with a 17-year-old prostitute, though that conviction was later overturned. Although the man the Italian press calls “the knight” has been unable to escape the clutches of judges determined to see him go down, Berlusconi's return to the political bigtime is just the latest in a string of improbable comebacks.

And he has even managed to make an asset of his history of legal woes, with supporters claiming attempts to prosecute the Forza Italia leader amount to politicized justice.

“In Italy, part of the judiciary is always involved in politics and judges have persecuted him because he's always won elections,” said De Giorgio.

Ruling Italy for a total of nine years between 1994 and 2011, Berlusconi became renowned for his buffoonish gaffes, friendships with the likes of late Libyan dictator Moamer Kadhafi, and a colourful private life epitomized by his notorious “bunga bunga” sex parties.

But for Raimando Suriano, 76, such longevity is a sign that the gaffe-prone ex-premier belongs in power.

“Berlusconi is the most solid, the most prepared, and he's got the most experience,” he said.