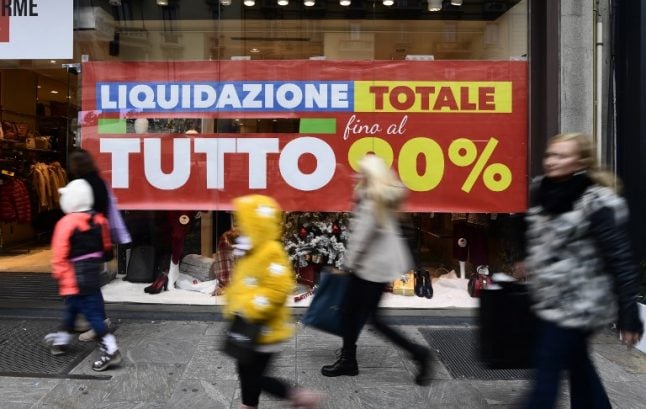 However, overall economic output is still nearly six percent lower than before the financial crisis hit in 2008 and Italy is way behind the 2.5 percent growth recorded by the eurozone last year, according to Eurostat.

Economists say this weakness is primarily due to Italian productivity being among the lowest in Europe, which in itself is due to factors like lack of credit, a mismatch between training and what companies need and a business environment that doesn't give entrepreneurs a helping hand.

“Since 1999, the productivity gap between Italy and the other major eurozone countries has widened significantly,” says Nicola Nobile from Oxford Economics.

Gross domestic product (a measure of total output in the economy) “per hour of work is 25 percent lower than that of Germany and France”.

If Made in Italy is a world leader in sectors like fashion and kitchen furnishings, it has nothing to do with the country's politicians, said Alessandro Iliprandi, chief executive of leather specialist Bonaudo. Italy accounts for 65 percent of European leather production.

“The political situation has been unstable for decades and politicians do not make the lives of entrepreneurs easier – quite the opposite,” he said.

For Iliprandi the obstacles that hamper everyday life are “the bureaucracy, the slowness of the justice system and the high taxes. To get out of this situation we need radical decisions to be made”.

Centre-left governments led by Matteo Renzi and Paolo Gentiloni have made efforts to ease the frustrations of Italy's business class, and with some success.

Between 2012 and 2017, the country jumped from 87th to 46th in the World Bank's Ease of doing business index, but it remains behind the likes of Romania and Moldova.

The labour market has been made more flexible by the Jobs Act introduced by Renzi in 2014, which has made it easier to fire employees and created a new type of permanent contract which increases protections for employees over the course of the contract.

But while Renzi says that he has created a million jobs, it's difficult to measure his real impact, and trade unions assert that the laws have actually contributed to creating more insecure, temporary employment.

But for Roberto Pirotti, a professor at Bocconi University in Milan, the Jobs Act, despite its shortcomings, is “a courageous and useful reform” in a country where the unemployment rate still stands at 10.8 percent, and 32.2 percent among 15-24-year-olds, well above the average in the eurozone. The Italian government recently lowered the corporate income tax rate from 27.5 percent to 24 percent, but it remains above the United Kingdom's 19 percent and very far from the 12.5 percent of Ireland or nine percent of Hungary.

Giovanni Lombardi, head of consulting company Tecno, which specializes in energy savings, welcomed the 'Industry plan 4.0' launched by the government in 2016, because “it encourages companies to invest in digitization and automation”.

“The market is completely polarized: companies that have not invested in innovation and technology are out of the race, while those that have have made leaps and bounds,” he added.

But Nobile at Oxford Economics fears that the post-election government will not press ahead with reforms like the simplification of bureaucracy.

Most political parties have prioritized promises of dramatic tax cuts that risk exploding the public deficit and debt, which at 131.6 percent of overall economic output is already the second highest in the eurozone.

Nobile's worries could turn out to be correct given pre-election polling, which has largely predicted a hung parliament, meaning there will likely be long negotiations before the next government is formed.

That will create a great deal of uncertainty about economic policy and risk a blow to investor confidence and financial markets just when Italy least needs it.