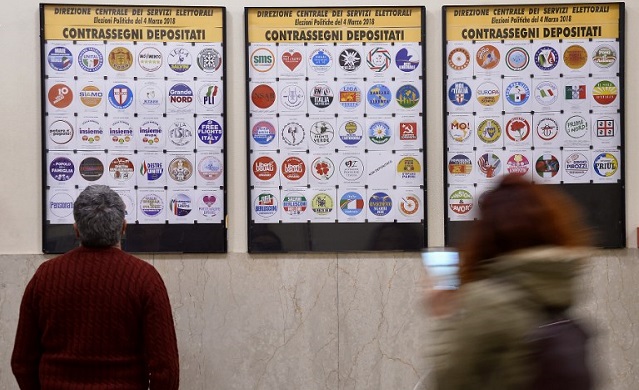 People walk past a board with the parties' logos. Photo: Filippo Monteforte/AFP

How costly are these electoral promises?

The party estimates extra spending of 35 billion euros ($43 billion), roughly in line with analysis from the Sacred Heart Catholic University's Italian public accounts observatory (OCPI), which puts the cost of the PD's
pledges at 38.6 billion euros.

However, according to Roberto Perotti, an economist at the Bocconi University in Milan, the PD's promises would cost some 56.4 billion euros. Meanwhile the Five Star Movement (M5S) — which is proposing a monthly basic income of 780 euros for those living in poverty — calculates its promises at 78.5 billion euros, but they are estimated at 103.4 billion by the OCPI and 108 billion by Perotti.

Those numbers rocket skywards for the right-wing coalition led by Silvio Berlusconi, which is pledging to abolish progressive taxation in favour of a flat rate.

“Election promises are of a different scale to the past,” says Perotti.

The populist League, formerly the Northern League, and the Five Star Movement have begun making grand promises in a bid to stand out from their traditional rivals.

“The other parties have had to adapt,” he added. Nicola Nobile from Oxford Economics speaks of “unrealistic or unhelpful” promises and believes that the country should instead pursue reforms that encourage growth rather than return to areas such as pensions where reform has already been carried out.

“Not enough progress has been made on the removal of tax and regulatory disincentives, the improvement of public administration, infrastructure or the judicial system,” he says.

What about the flat tax?

One of the right's flagship promises is to institute a “flat tax” in place of the current progressive system.

Berlusconi's Forza Italia (Go Italy) is proposing a flat rate of 23 percent, while his far-right partners the League has lowered the bar further to 15 percent.

The League also proposes a tax exemption of 3,000 euros per individual in each household, including children, before the flat tax is applied, while Forza Italia is pledging to exempt 12,000 euros per working adult.

Forza Italia politician Renato Brunetta says that the idea is to cause a “fiscal shock that will enable the country to escape the trap it's stuck in”, and increase growth levels to “more than three percent” from the current rate of 1.5 percent.

READ ALSO: Inside a campaign event with Berlusconi's supporters Perotti estimates the cost of the policy to be around 65 billion euros, while the League forecasts 30 billion and Forza Italia around 50 billion.

Capital Economics analyst Jack Allen doubts the proponents' growth claims and believes that the wealthiest will benefit the most from the reform.

“A 2015 study by the Bank of Italy estimated that households with low wealth would respond to a one euro increase in disposable income resulting from a tax cut by raising their spending by 60 cents,” he says.

How will public debt be affected?

Italy is groaning under the weight of a public debt of 2,256 billion euros, 131 percent of GDP — the second highest ratio in the EU behind Greece.

The big parties have promised to lower it, but the OCPI says that in the event they are unable to cover the cost of their policies, the debt would reach 134.8 percent of GDP under the PD, 135.8 percent under Forza Italia and 138.4 percent under the M5S.

“If we implement just a third of what has been promised, Italy will not be able to respect the (EU-imposed) deficit to GDP threshold of three percent,” says Perotti.

“Currently we are at 2.5 percent and we would just need to spend 8 billion euros more to reach three percent.”

Perotti calculates that “if implementing a flat tax has a cost of around 65 billion euros, to recover this money GDP growth would have to reach 160 billion, or 9 percent of current GDP. That is unthinkable.”

All parties apart from the League have promised to respect the threshold, and Allen claims that in order to do so they will have to cut spending.

“The government would have to accompany big tax cuts with big cuts to spending if it was to avoid a blow-out in the budget deficit,” he says.