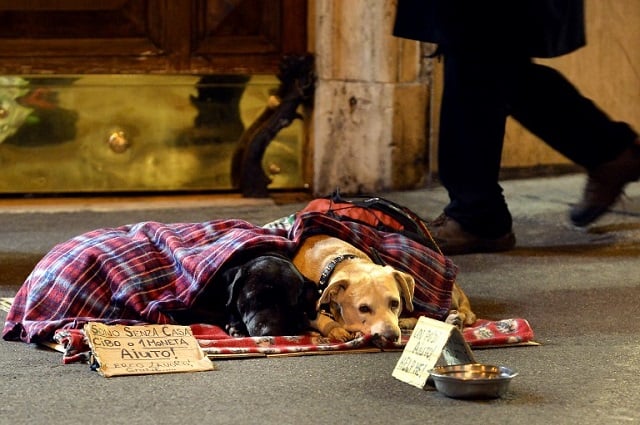 Two dogs lie under a blanket alongside a note asking for money. Photo: AFP

Wealth distribution has been at the heart of debates on the economy during the campaign, with the main parties promising to wage a war on poverty in one of Europe's most unequal societies.

Their proposed measures range from a universal basic income put forward by the anti-establishment Five Star Movement, to promises of an official minimum wage by the country's ruling centre-left Democratic Party.

“In Italy, a small number of Italians earn a lot of money whereas the majority are poorly paid for their work,” said Pier Giorgio Ardeni, a political economy professor at the University of Bologna. “And while skilled workers' wages have risen over the last years, pay for unskilled work has decreased.”

In December, Eurostat said Italy had the highest number of people living in poverty in Europe — 10.4 million.

Massimiliano Signifredi, from the Catholic charity Sant' Egidio, which has been working with Italy's poorest for 50 years, said he had seen a steady increase in the number of people coming to its soup kitchens.

“There is a worrying trend where the age at which people are able to leave home and start a family is getting later and later, often exceeding 30 years of age.

“In Italy it is now the country's elderly who are propping up the younger generations financially, a grandfather will support his grandson,” Signifredi said. Traditionally, one of Italians' main defences against the scourge of poverty has been their asset wealth — a culture of investing in real estate which means that today 77 percent of families own their homes.

“Homeowners in Italy benefit from an advantageous inheritance tax system, which means that some families have seen their real estate assets grow from generation to generation,” said Marco Montemauri, a real estate agent in a well-to-do area of central Rome.

Recent surveys show that over the past decades, income from property has increased far more than income from work, a trend also present in other European countries.

A study carried out by the Bank of Italy in the central region of Tuscany showed that of the five families with the highest incomes in 2014, four were already part of the richest three percent of Tuscans in the 15th century.

“There is a concentration of wealth and as this wealth is passed down, it is logical that the successor will likely accumulate more and more,” said Ardeni.

“A worker's child often remains a worker while rich kids can set their sights much higher,” he said.