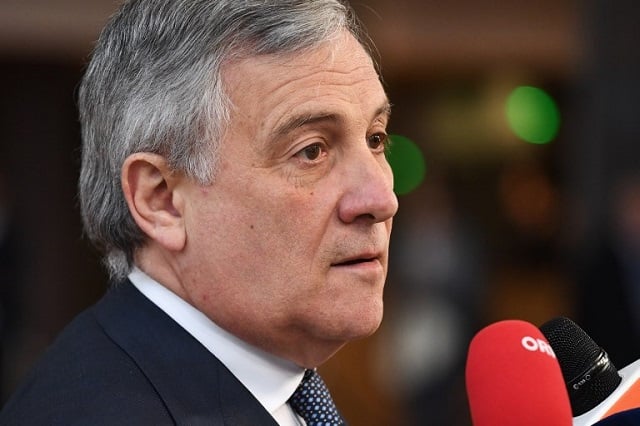 “I am pleased to be able to announce the good news that the current president of the European Parliament has made up his mind and indicated that he is willing to lead a future centre-right government,” Berlusconi said on Canale 5, one of his TV networks.

“He is someone who knows all of Europe,” said Berlusconi, who leads up the Forza Italia (Go Italy) party and a rightwing coalition with the far-right League and Brothers of Italy.

The choice could put Berlusconi on a collision course with his europhobic allies, particularly with League leader Matteo Salvini who has prime ministerial ambitions of his own.

Berlusconi, an 81-year-old three-time prime minister who is himself legally barred from holding elected office because of a fraud conviction, had previously hinted that Tajani would be his favoured choice for the post.

Tajani has been a close ally of Berlusconi ever since the flamboyant businessman first entered politics in the early 1990s. Tajani helped Berlusconi found Forza Italia and became his spokesman after his election in 1994.

The 64-year-old confirmed his decision on Twitter. “I thank Berlusconi for his gesture of respect in my regard. I have indicated him this evening my readiness to serve Italy,” he said.

Tajani, an affable and canny networker with a fondness for luxury watches, took over the European Parliament presidency last year after more than 20 years in EU politics.

A former journalist with Italy's Rai television and Il Giornale newspaper, he speaks French, English and Spanish. He has been in the European Parliament since 1994. He also served as EU transport commissioner in 2008-10 and then as industry commissioner in 2010-14.

Berlusconi's coalition is expected to win the most votes in Sunday's election, according to the last opinion polls before the vote, but may fall short of getting a majority.

That would open a period of negotiation between different parties in which President Sergio Mattarella, whose role is usually largely ceremonial.

As he announced his candidacy on Thursday, Tajani said: “Everything that happens next is in the hands of our fellow citizens and the president.”