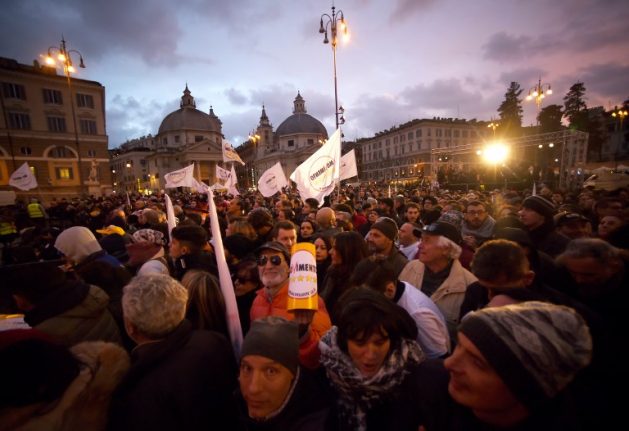 Supporters of the populist Five Star Movement (M5S) gather at the end of the last election campaign meeting by the party leader in Piazza del Popolo in Rome on Friday. Photo: Filippo Monteforte/AFP
No campaigning was allowed on Saturday on the eve of the closely-watched poll. Rival parties held their final rallies on Friday, at the end of a bitter race marred by clashes between far-right and anti-fascist activists.
The outcome is far from certain and could end up in a draw between the anti-establishment Five Star Movement, three time prime minister Silvio Berlusconi's rightwing coalition and the ruling centre-left Democratic Party.
See The Local's complete guide to the Italian election
Berlusconi cannot himself hold office because of a tax fraud conviction but is still hoping to play a leading role and has put forward European Parliament President Antonio Tajani as his prime ministerial nominee.
Berlusconi's plans, however, face a challenge from his ambitious coalition partner, League leader Matteo Salvini, whose anti-immigration and eurosceptic rhetoric has fired up the campaign.
'Pure populism'
Italy's election “epitomises everything, it is pure populism,” former White House adviser Steve Bannon, who harnessed the populist insurgency that propelled US President Donald Trump to power, said in an interview with the New York Times.
Bannon, who is visiting Italy as part of a European tour, told the paper: “The Italian people have gone farther, in a shorter period of time, than the British did for Brexit and the Americans did for Trump”. Bannon called a coalition between the Five Star Movement and the League the “ultimate dream”.
Salvini could head the government if the coalition wins and if his party gets more votes than Berlusconi's Forza Italia (Go Italy).
“From Monday, the League will govern this country,” Salvini told supporters at his final campaign rally in Milan on Friday.
The rightwing alliance has promised to deport some 600,000 irregular migrants — roughly the number of asylum-seekers that have arrived on boats from Libyan shores since 2013 — a proposal dismissed by the government as unfeasible.
Possible scenarios
Democratic Party leader Matteo Renzi told a final campaign event in his native Florence that only a vote for his party would prevent Salvini from taking power.
“The Democratic Party is the only serious political force that can bring concrete results,” Chiara Serdone, a 70-year-old retired railway company employee, told AFP at the rally.
If no party wins an overall majority, one possible scenario outlined by analysts could be a grand coalition between the Democratic Party and Forza Italia. Another possibility could be a temporary government shaped by President Sergio Mattarella, whose role is normally largely ceremonial, and eventually new elections.
The last polls — issued on February 16 before a pre-election ban came into force — showed Berlusconi's four-party coalition in the lead with 37 percent, including 17 percent for Forza Italia and 13 percent for the League.
The Five Star Movement got 28 percent of voting intentions while the main centre-left coalition scored 27 percent, including 23 percent for the Democratic Party.
A new electoral law makes predictions difficult, but experts estimate a coalition would have to win at least 40 percent of the vote to win an overall majority.
'Gave me hope'
The anti-establishment Five Star Movement has ruled out any post-election coalitions, which it rejects as old-style politicking.
Thousands of Five Star supporters held their final rally at Piazza del Popolo in central Rome on Friday.
Founded in 2009, the Five Star Movement has drawn support from Italians disillusioned with traditional parties.
“Tonight the era of opposition finishes, and the era of Five Star Movement government begins!” leader Luigi Di Maio told the crowd, promising to slash politicians' salaries and perks and root out corruption.
“I had not voted for a long time and then I began following the movement when it started out,” said Marco Becchi, a 30 year-old supporter in the crowd. “They gave me a reason, hope to vote again and to believe in this country. I think there is a high probability that they will get into government.”
By AFP's Dario Thuburn