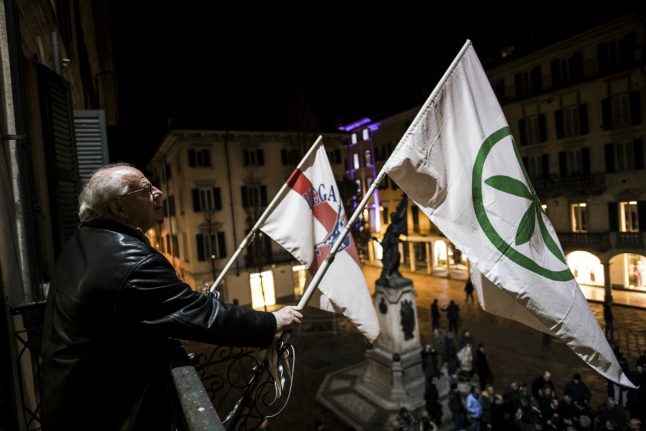 “With the League in power, I won't have to deal with people coming here from abroad who are willing to earn less than me to do the same job,” said Davide Quadri, a 25-year-old law student as he celebrated the League's win at the party's local headquarters.

Though the country was plunged into uncertainty on election night, with no party or coalition obtaining the votes to form a government, the far-right League surged in the polls.

Led by ambitious leader Matteo Salvini, it became the biggest party within its coalition — which scooped 37 percent of the vote — emboldening its supporters.

“All that (immigration) has to stop, so that young people study, work and have a future here,” added Quadri.

Surrounded by party posters emblazoned with the League emblem — a warrior brandishing a sword towards the sky — newly elected MP Matteo Bianchi said young people had been “let down by leftists politics over the last few years”.

“It explains Italy's brain drain: this misfortune that pushes young qualified people out of Lombardy to start life abroad.”

Born in the 1980s as a northern secessionist movement, the League has rebranded itself as a nationalist party, rallying against traditional politics and raging about hundreds of thousands of illegal migrants in Italy.

Banners plastered on the walls of the Varese offices denounce “the dominance of Rome,” the collusion between “politics and mafia”, or simply declare “'No' to the immigrant vote.”

In the Varese province, where unemployment stands at 8.2 percent – higher than the average for the region but 3.5 percent lower than the national rate — the League made historic gains, with some candidates obtaining one in every two votes.

“This result is linked to the wave of immigration over these last years and to the feeling of insecurity that it has brought with it,” says 34-year old legal advisor Chiara Gorone.

“Even in little villages, we are confronted with migrants squatting in buildings, it's true that we'd like to go back to a calmer situation,” she added.

The party has had to fend off accusations of racism, especially after Lombardy's new governor and League representative, Attilio Fontana, called on Italy to defend the “white race” during the election campaign.

But supporters say Italy has done more than its fair share to house the migrants who have arrived on the country's shores by boat from Libya.

They also point to Tony Iwobi, 62, who became the first black senator ever to be elected in Italy after Sunday's vote and hails from the anti-migrant movement.

Promises to send immigrants back home was not the only string in the League's bow.

In Lombardy, it drew support from residents who believe the party will grant them greater regional autonomy.

In a consultative referendum last October in Lombardy and Veneto, an overwhelming majority of voters from these two regions, which together account for 30 percent of the country's GDP, voted 'yes'.

In the strongly industrial region, the League also won over small and medium business owners, with the promise of tax cuts.

“Thirty years ago, Italian entrepreneurs were envied worldwide for their creativity, then the decline started and today the best want to go abroad,” said 67-year-old Eugenio Malnati, who manages a small business.

“Taxes, bureaucracy, all that has smothered us,” he added.

And don't even mention the concept of basic universal income, promised to poor Italians by the Five star Movement. For those in wealthy Lombardy, the incentive is seen as a reward for laziness.

READ ALSO: Italians demand M5S basic income – even though the party's not in power